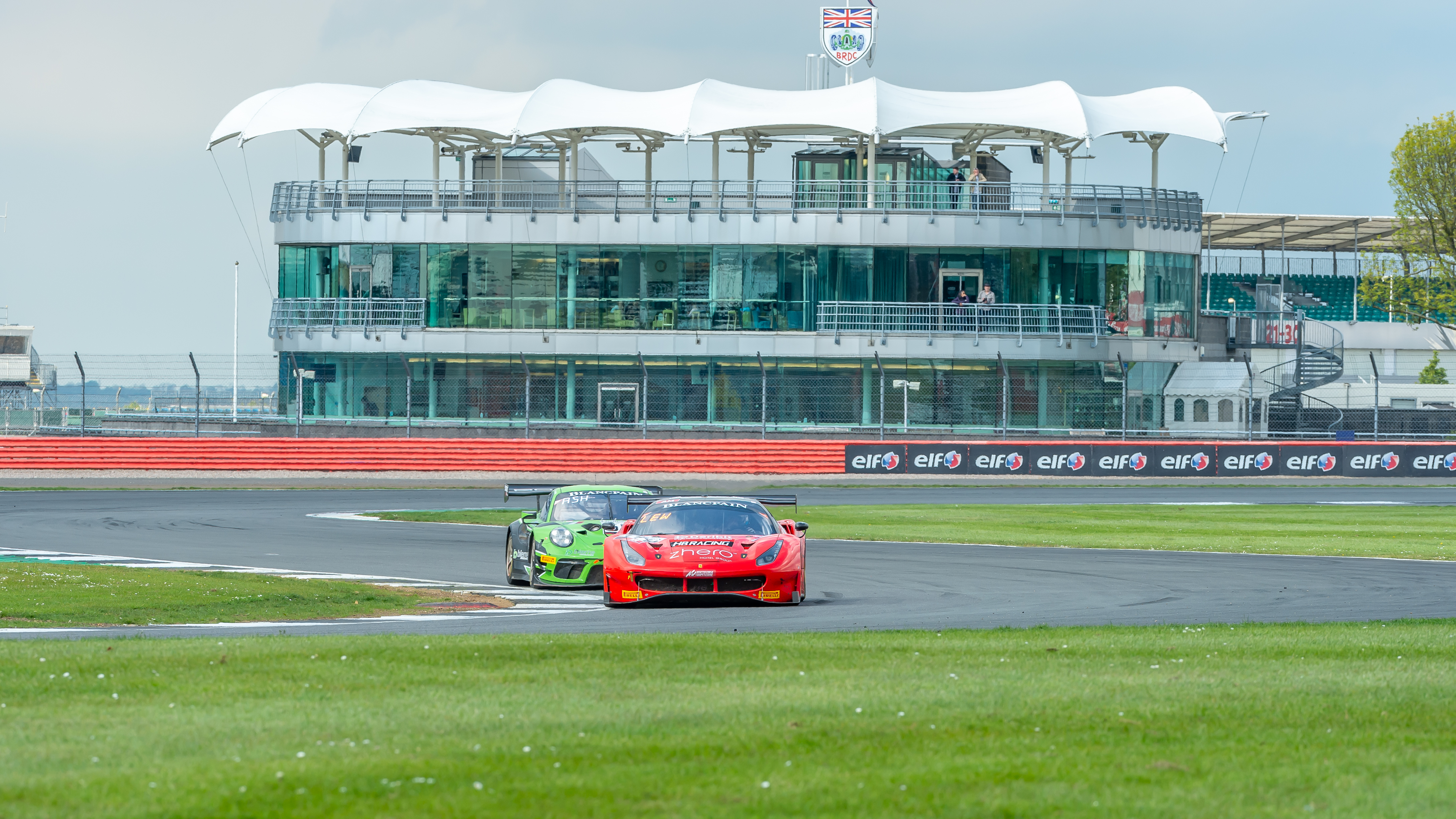 The Blancpain GT Series returns to Silverstone for its third round of 2019, a field of 48 cars will tackle the 3.6 mile circuit at Silverstone. The start of the three-hour endurance race was dramatic for the #72 car slipped a place at the start, but Russian ace Aleshin was able to stay out of trouble on a dramatic opening lap that saw a multi-car crash occur on the Hanger Straight. The majority of the first stint was led by the pole-sitting #63 Grasser Racing Lamborghini Huracan with Christian Engelhart at the wheel, but all hope of victory was lost when the car suffered an ill-timed puncture. This promoted the #563 Orange1 FFF Racing Lamborghini into the lead, ahead of its sister #519 car. Meanwhile, the #72 Ferrari ran on the fringes of the top-10 during the opening hour of the race.

The #563 was the first to stop shortly before the 60-minute mark, but this would prove costly as the race was neutralised again to recover a stranded car. By stopping later, the #519 Lamborghini was able to take the lead ahead of the #2 Belgian Audi Club Team WRT effort, while the #72 Ferrari also made major gains by moving up to third. 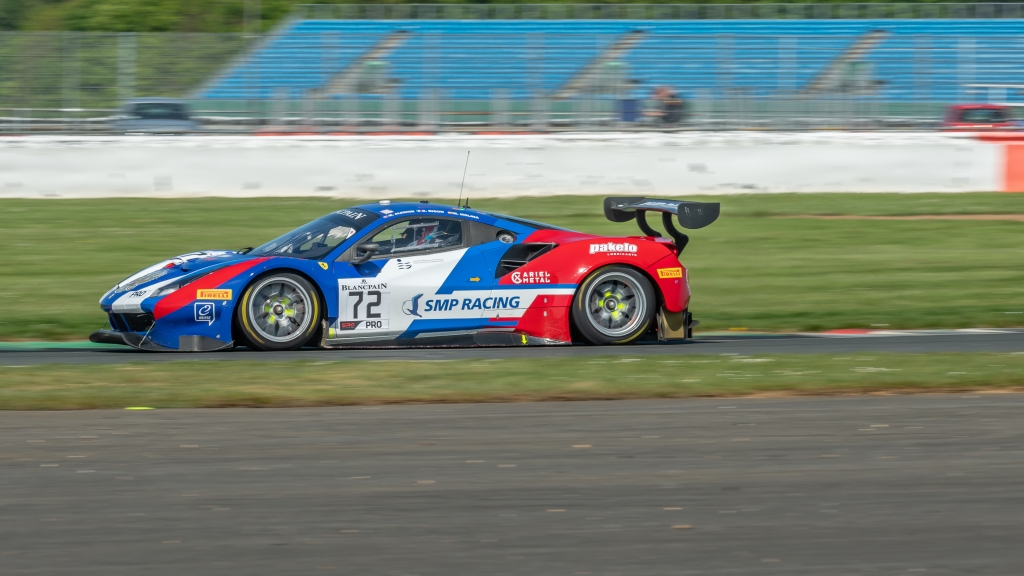 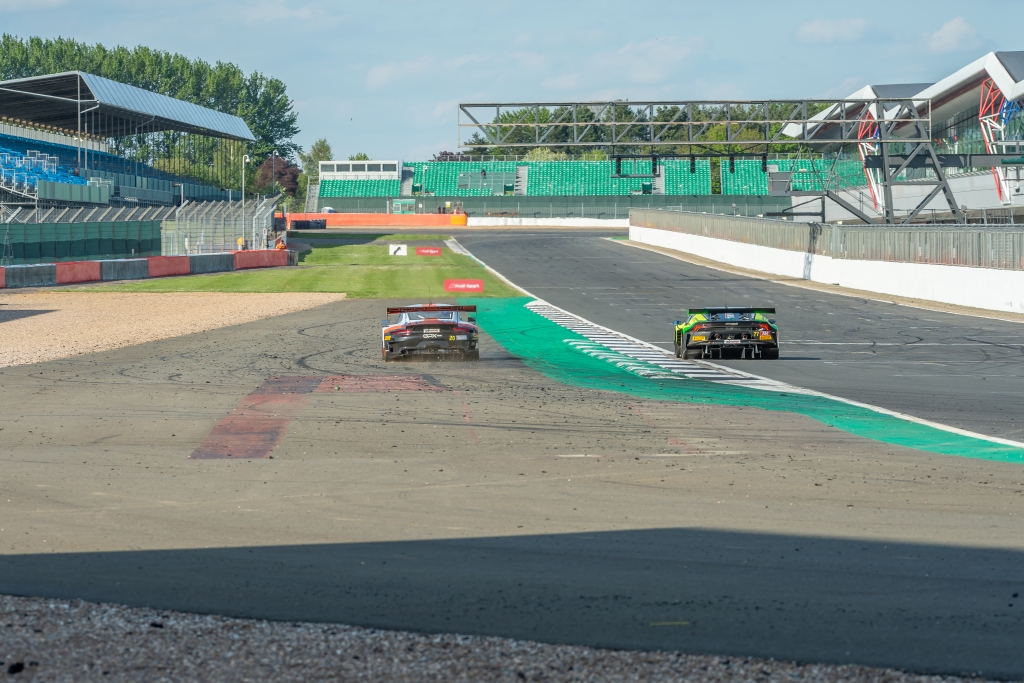 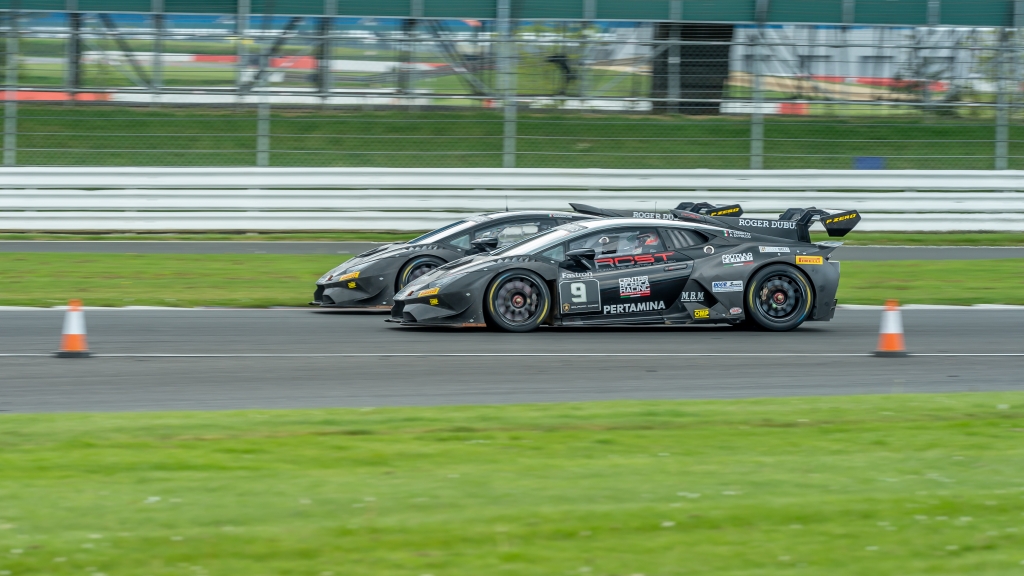 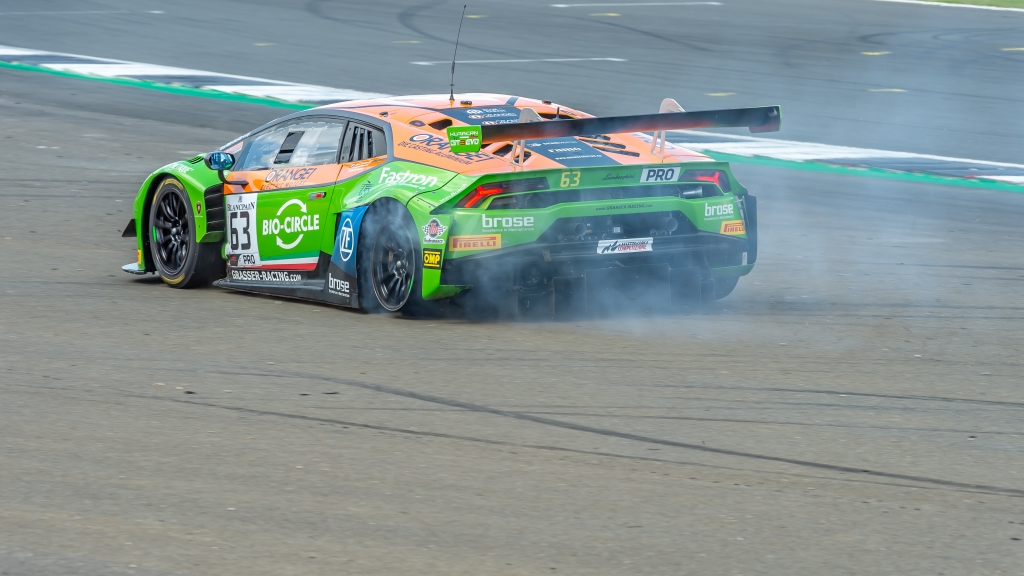 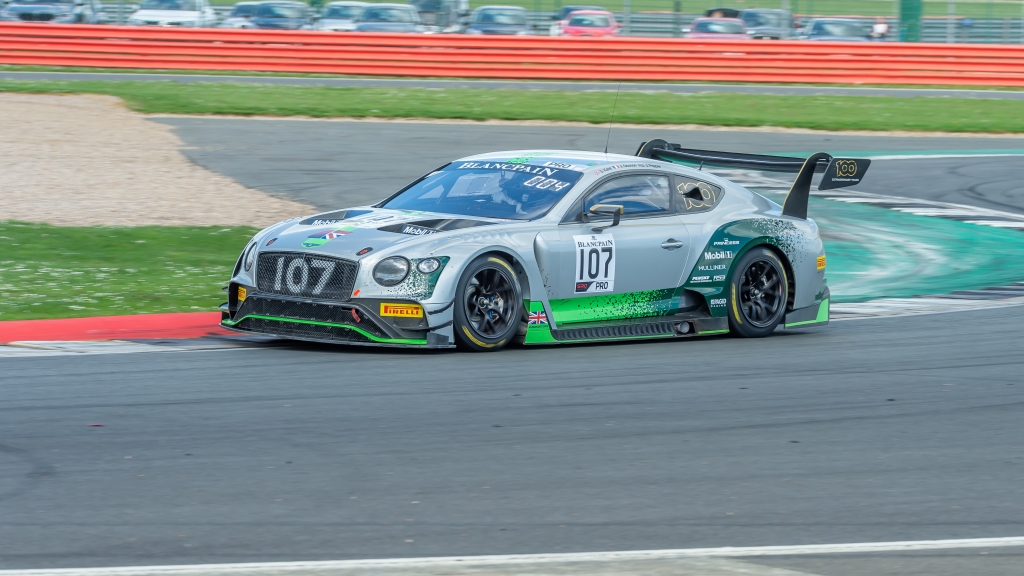 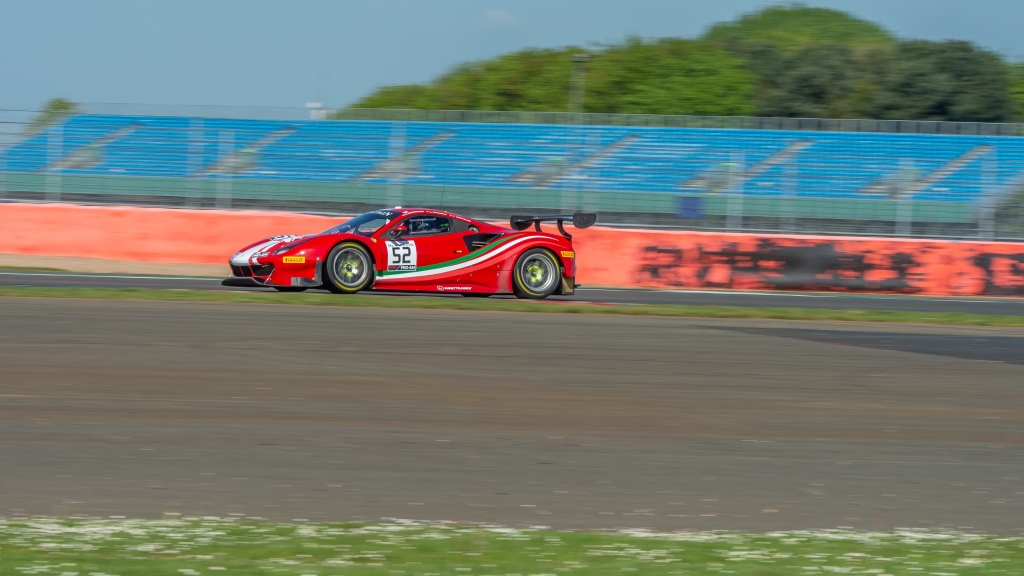 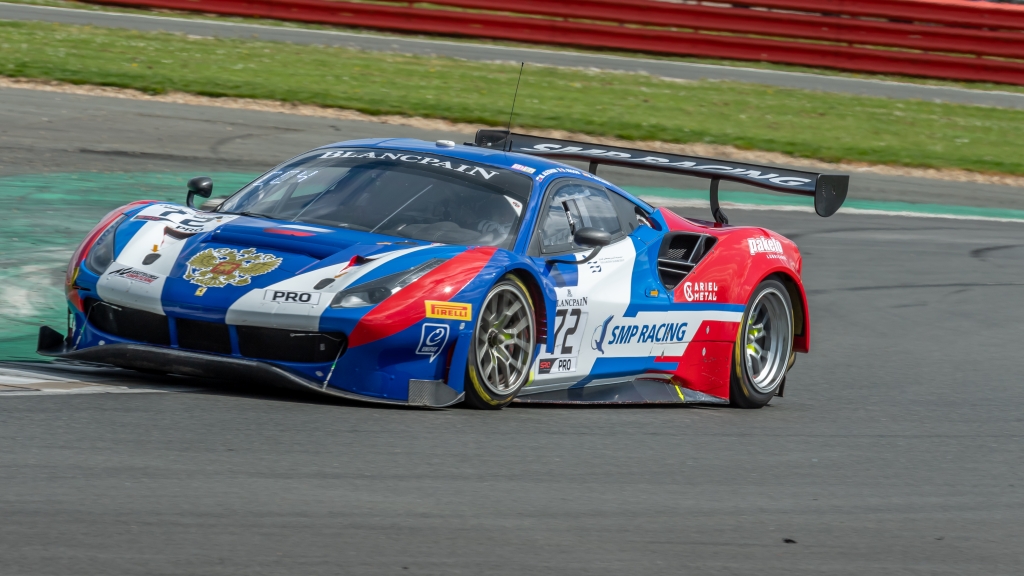 Miguel Molina took the wheel from Aleshin, and when racing resumed the Spanish ace made a bold pass on Ezequiel Perez Companc in the #2 Audi to capture second spot. Out front, Phil Keen was able to edge away in the #519 FFF car and when the #563 Lamborghini overhauled the SMP Ferrari, it looked as though the Bologna brand was on for a one-two finish.

But the #563 lost out again during the final pit stop, slipping to fifth and out of the lead battle. The final stint saw the race develop into a straight fight between the #519 Lamborghini – driven by Giovanni Venturini – and Rigon in the #72 Ferrari. The SMP Racing driver clearly had superior pace and was able to quickly reel in the Lamborghini, but Venturini was resolute in his defence.

For almost half an hour the two Italians were nose to tail and as the race reached its final 20 minutes, it seemed that Venturuni would be able to hold on.
But with 17 minutes left on the clock, Rigon made his move, sneaking into a gap and edging ahead as the cars exited Luffield. Once the Ferrari had the lead it was never likely to be challenged, with Rigon coolly edging away to win by 2.6 seconds. Venturini followed him across the line to secure a second Endurance Cup podium in as many events for series newcomer FFF Racing. 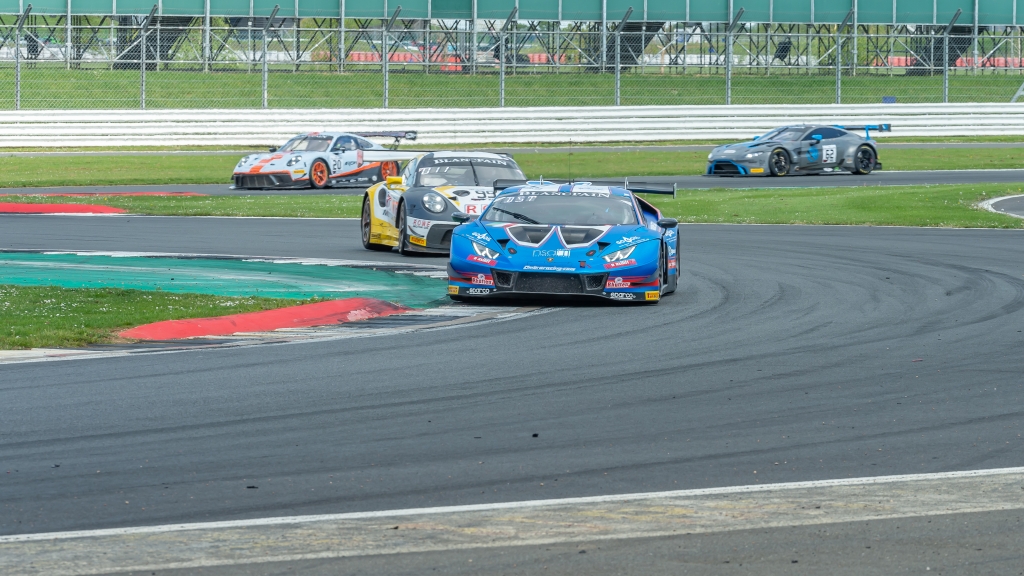 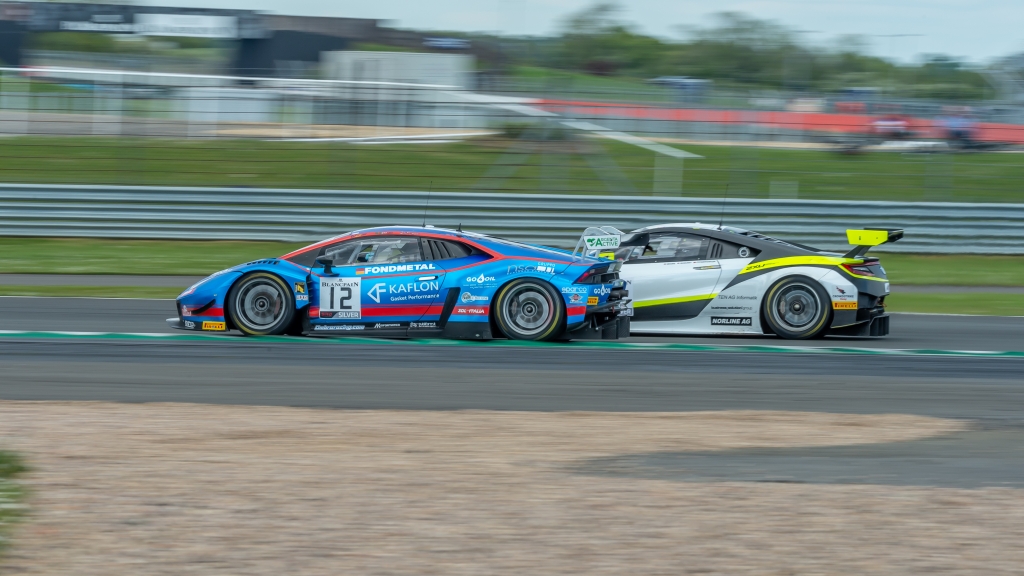 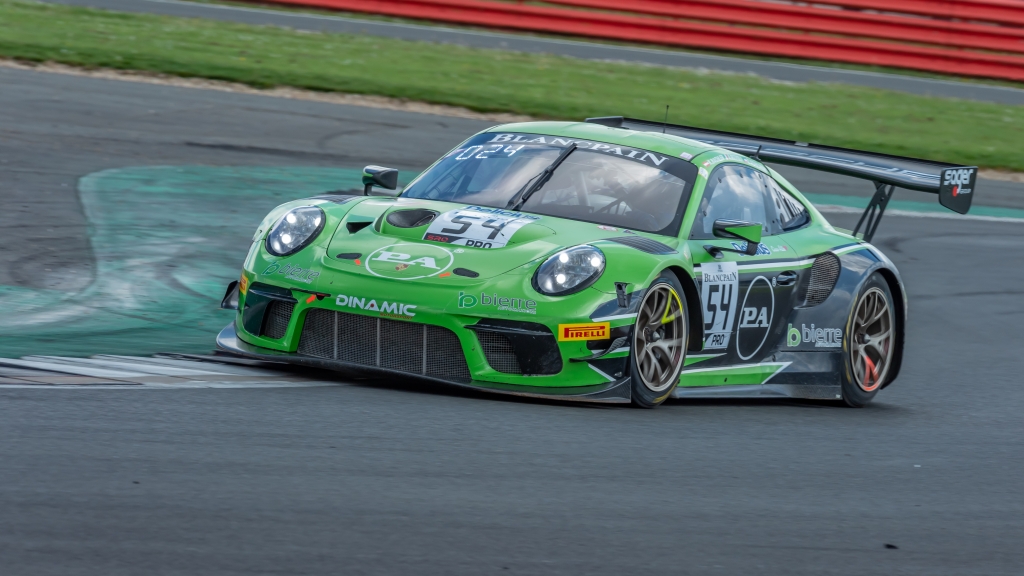 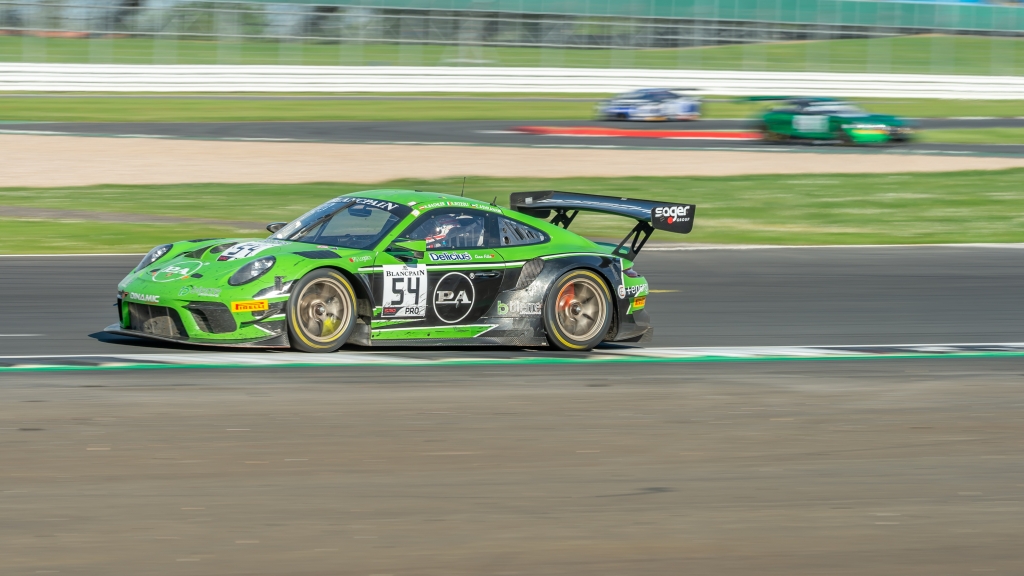 The final spot on the overall podium was extremely hotly contested, with the #43 Strakka Racing Mercedes-AMG looking set to seal the place after a truly remarkable rise from 41st on the grid. But a collision with the recovering #563 Lamborghini put Strakka driver Jack Hawksworth off the road, while also leaving the FFF-run car with significant damage. This allowed Dries Vanthoor to bring the #2 WRT Audi through for the final podium place, while the #98 ROWE Racing Porsche 911 GT3 R finished fourth after starting 39th on the grid. Hawksworth recovered to fifth, ensuring Strakka was rewarded with a strong points haul at its home event.

The Silver Cup class was won by the narrowest of margins. The #19 Grasser Lamborghini led much of the event, while also vying for the overall podium, but a late charge saw the #55 Attempto Racing Audi cross the line just 0.013s shy of the winner.

The Pro-Am class was also decided during the final stint, though the battle was settled considerably earlier than the Silver Cup contest. The #74 Ram Racing Mercedes-AMG prevailed thanks to Tom Onslow-Cole and Remon Vos, the British ace passing the #93 Tempesta Racing Ferrari 488 early in the concluding hour. This ensured that the local squad won its home event for a second successive season, with the #52 AF Corse Ferrari eventually taking second spot.

The Am Cup category was also won by a British squad as Barwell Motorsport continued its incredible run of form with a fourth successive class win. The #77 Lamborghini started from Am Cup pole, though its fortunes fluctuated throughout the race and it took a measured drive from Adrian Amstutz, Leo Machitski and Miguel Ramos to continue the winning run.