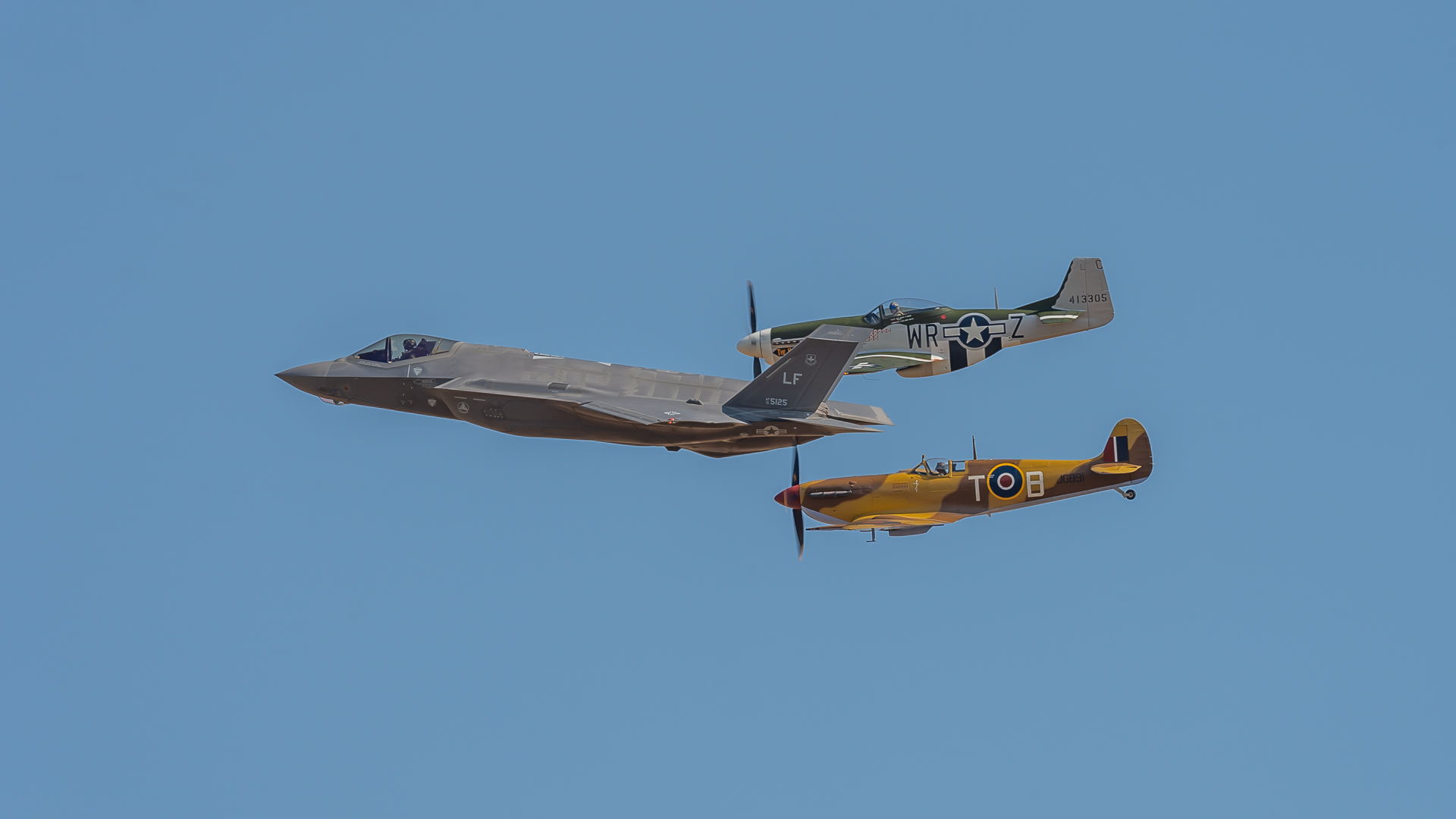 Scramble-Scramble was the term used for the very young pilot’s running to their aircraft to get airborne as quickly as possible to face the enemy….. very few returned.

This scramble was beautifully revived during the opening of the Flying Legends with a Spitfire Scramble of nine Spitfire's performing tail-chases and fly-past for the audience, which as always at one of these terrific events,  appeared in very large numbers.

Naval Tribute with Goodyear Corsair and Grumman Bearcat F8F.  The first service for the Corsair was with the US Marine Corps operating from makeshift land bases across the Pacific, and it was not until later that she was operated from aircraft carriers initially with the British Fleet Air Arm. The Corsair proved to be a formidable air superiority fighter during World War II when she was the scourge of the skies across the Pacific and continued to deliver sterling service in later years during the Korean War. The Bearcat was designed and manufactured by Grumman Aircraft Engineering Corporation in response to the US Navy’s request in the latter war years for a fast responsive fighter to be deployed in the Pacific Theatre.

Brothers in arms, The Curtiss Trio, a formation of three aircrafts from the Curtiss Wright Corporation. Built  in 1939, the manufactured Curtiss H-75 powered with a one Pratt and Whitney R-1830-925 engine has a exceptional colour scheme  from the Armée de l’air Lafayette Escadrille with the Sioux Indian head .The Curtiss-Wright Warhawk P40F delivered in a desert colour scheme “Lees Hope” from the 85th Fighter Squadron and 79th Fighter Group, this Warhawk P40F was powered by one Rolls Royce Merlin 500 engine. “The Fighter Collection’s” Merlin-engined P-40F is one of only two left airworthy anywhere in the world.  Last, but not least, the very nicely polished Curtiss-Wright P.40C was finished with the Army Air Corps Technical School colour scheme and powered with an Allison C15-33 engine. 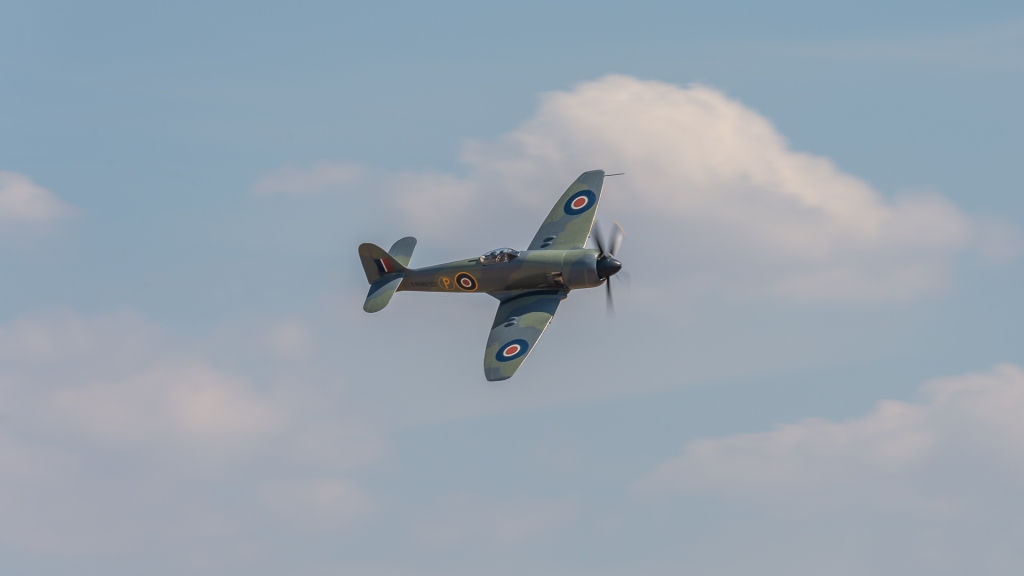 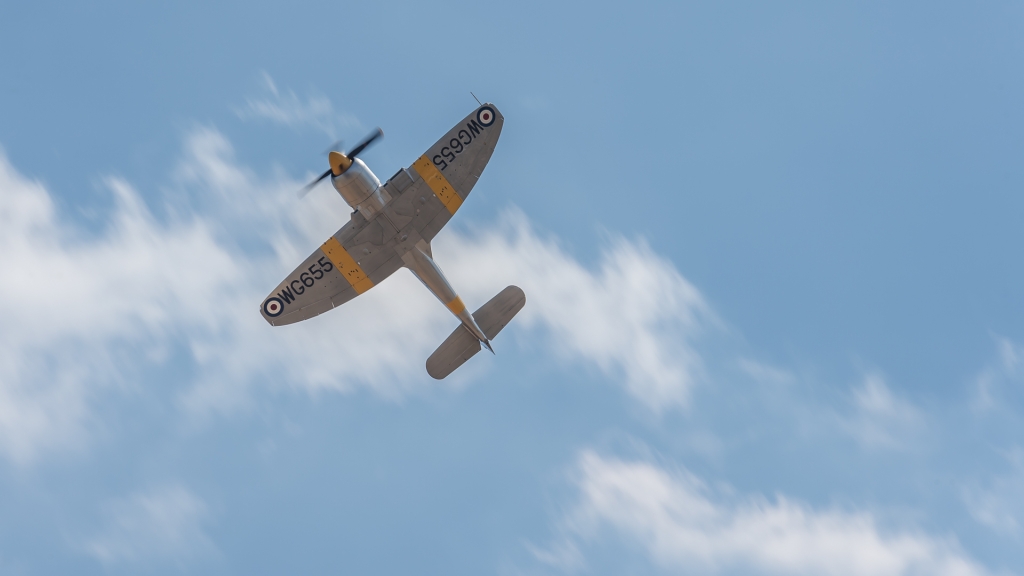 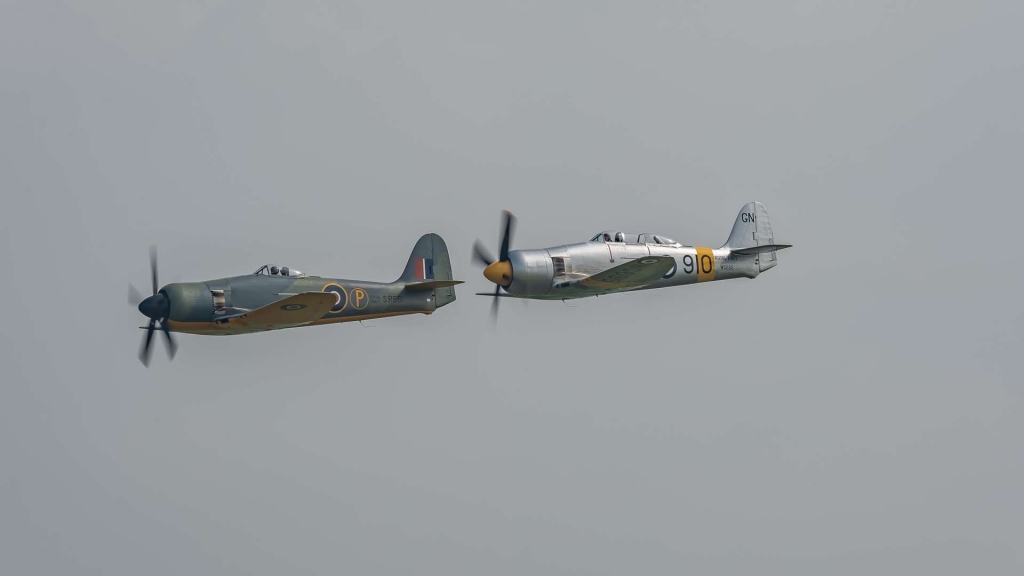 The Hawker Fury formation.  The Hawker Sea Fury T.20 was built at Hawkers, Kingston-upon-Thames with final assembly at Langley with serial No. WG655 and powered by one Pratt& Whitney R2800 engine. In 2008 the Sea Fury was sold to The Fighter Collection and had a re-engine program this year. The Hawker Sea Fury Mk.II, after a long journey from the Iraqi Air Force to private owners in the USA,  was imported back into the UK by her new owners,  Anglia Aircraft Restorations Ltd.  She was re-registered again as G-CBEL.  The aircraft has been refurbished and repainted, by Air Leasing Ltd, in the colours of one of Hawker’s Sea Fury prototypes coded SR661, which was a modified Fury Mk.II with a tail hook fitted, but without the folding wings included on subsequent production Sea Fury’s.  The aircraft is currently based at North Weald Airfield, Essex, UK.

Bryan Adams sings about the summer of 69, but it was the summer of 2003 that was the start of a major restoration of the Bristol Blenheim Mk.I and after 11 years of accuracy work, on the 20th November 2014 Chief Pilot John Romain and James Gilmour as Flight Engineer took Blenheim MkI on its maiden flight at Duxford for a successful 26 minute test flight.  Following some minor adjustments, a further two test flights were carried out. The tribute to the Battle of Britain was this time reserved for a formation flight of the Blenheim MkI flanked by two Spitfires MkI and four Hawker Hurricanes. 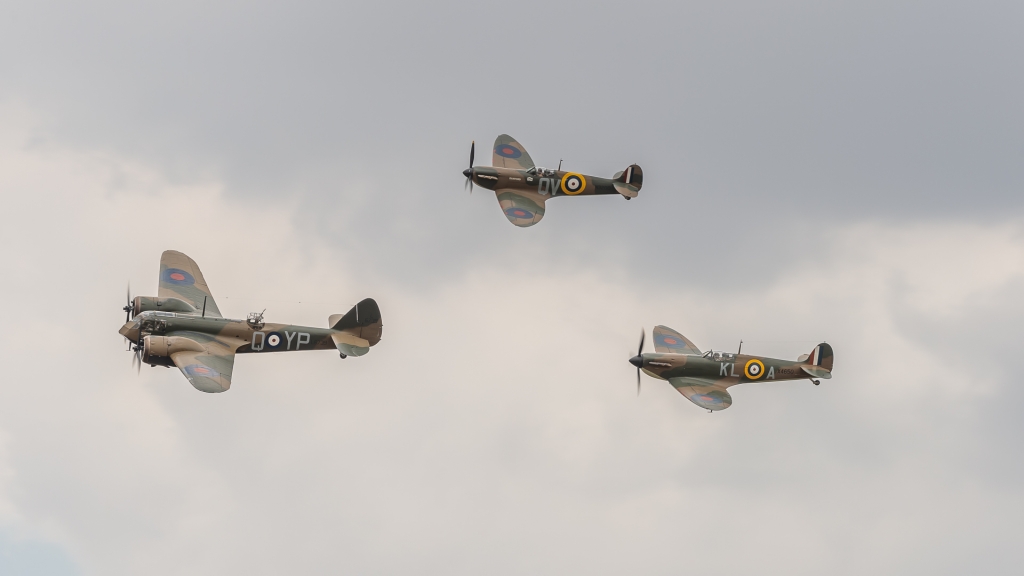 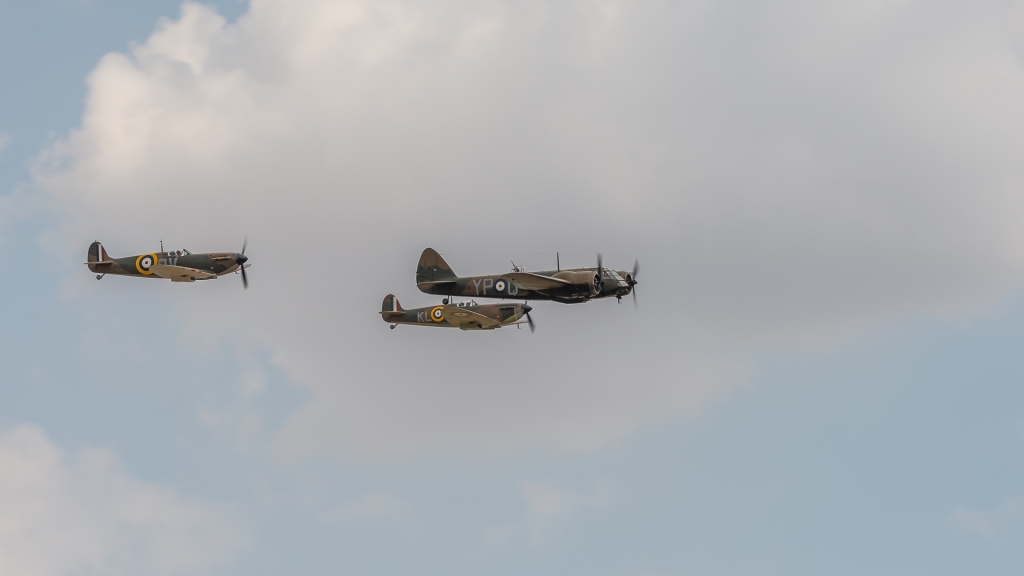 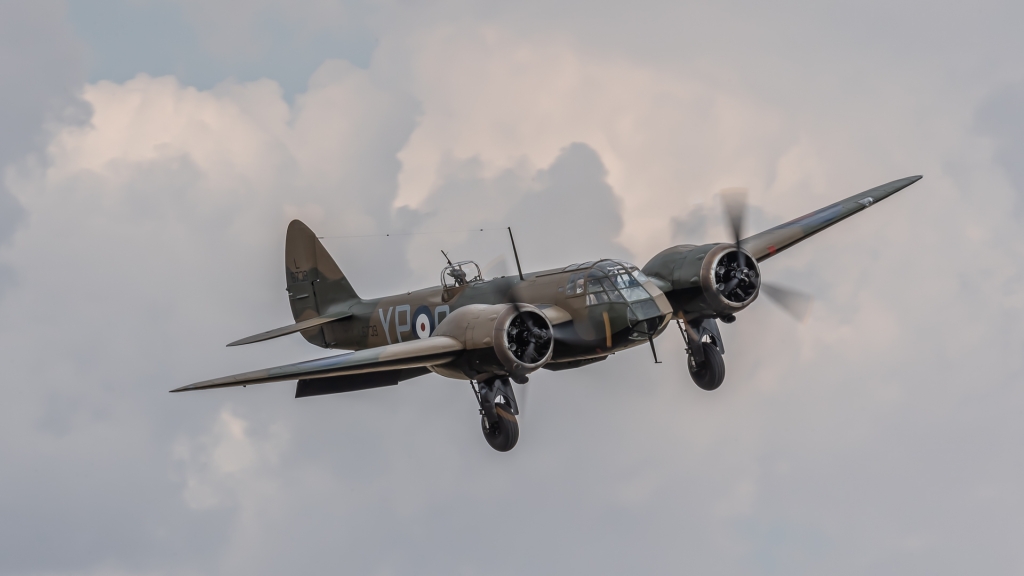 The Avro Lancaster, the most successful British heavy bomber of World War II, powered by two 24-cylinder Rolls-Royce Vulture engines and armed with a mixed load of high-explosive bombs and armed with a powered tail turret mounting four 0.303-inch (7.7-mm) machine guns, a powered twin-0.303 turret on the upper rear fuselage, and a pair of 0.303s in the nose; a few had twin-0.303 belly turrets.  Operated by a basic crew of seven, including the pilot, copilot, bombardier, navigator, radioman, and gunners.  Many of these young crew lost their lives over enemy lines during dangerous nightly bombings. The Lancaster PA474, from the Battle of Britain Memorial Flight,  is one of only two Lancaster aircraft remaining in airworthy condition out of the 7,377 that were built  (the other is in Canada with the Canadian Warplane Heritage Museum at Hamilton, Ontario).

The Classic formation, a beautiful formation of four aircrafts, three Beech 18’s and one DC-3 and owner of Hugo Mathys from The classic Formation in Switzerland.   The only thing you can say about the Swiss is that this all happened with great precision. 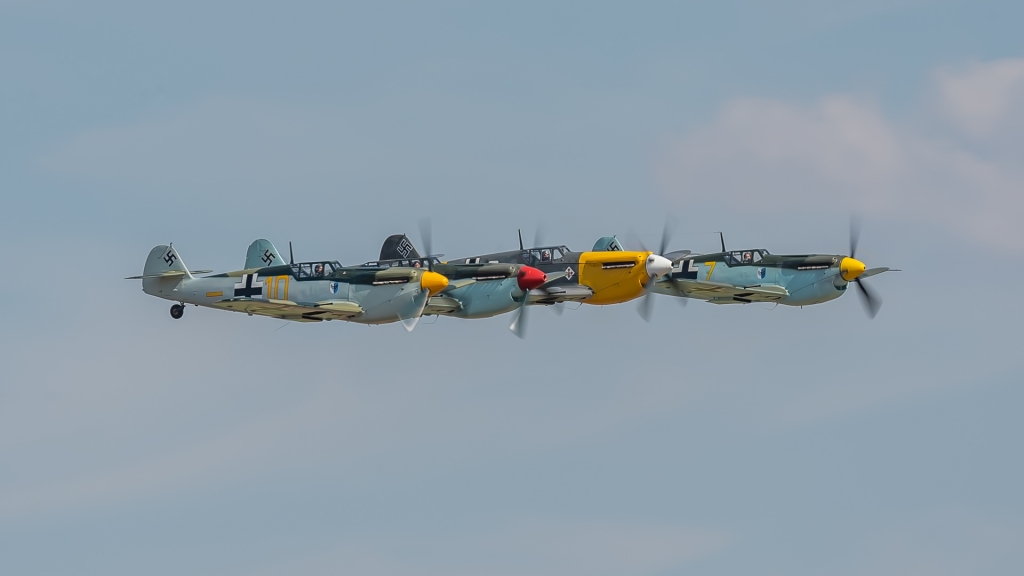 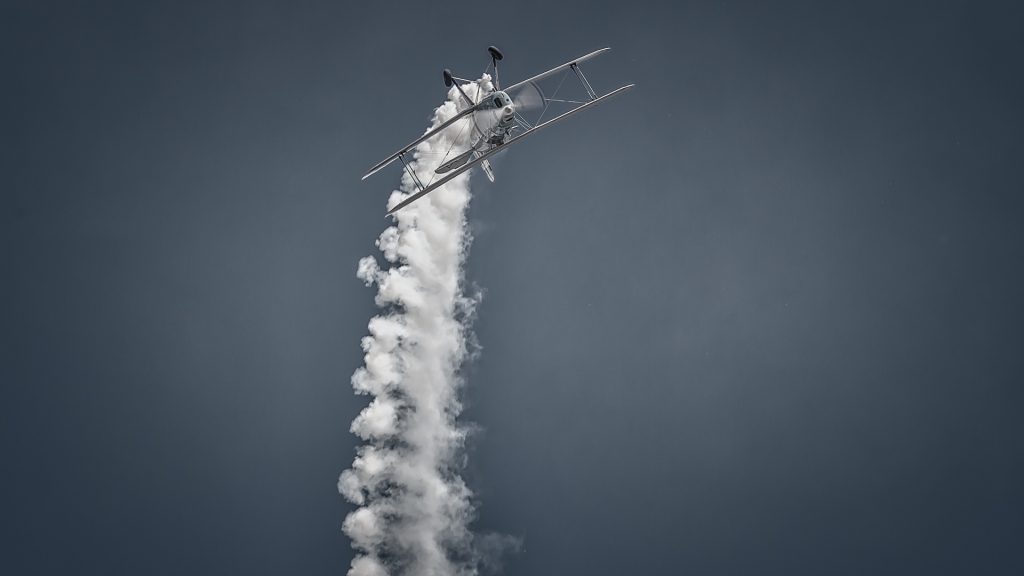 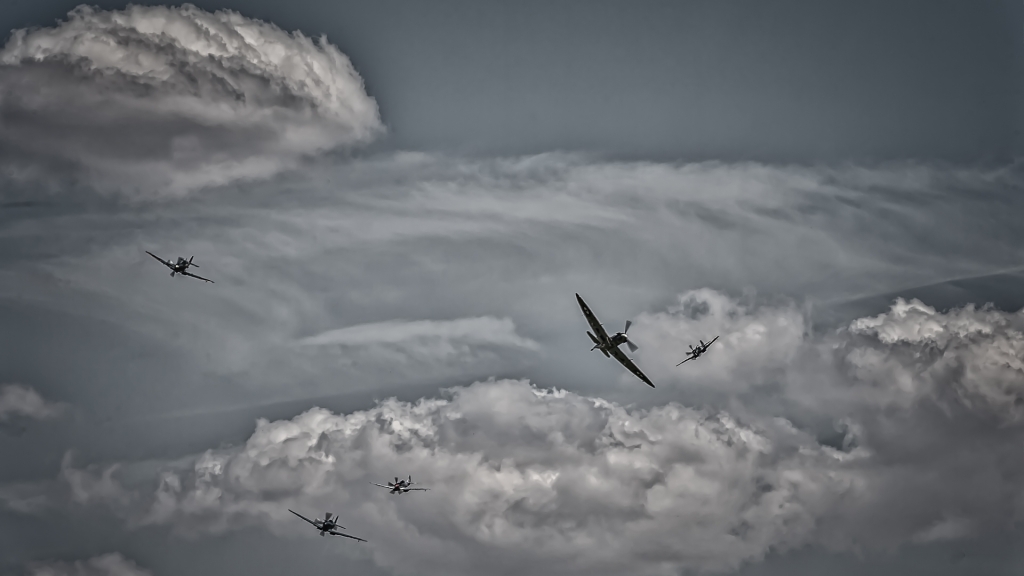 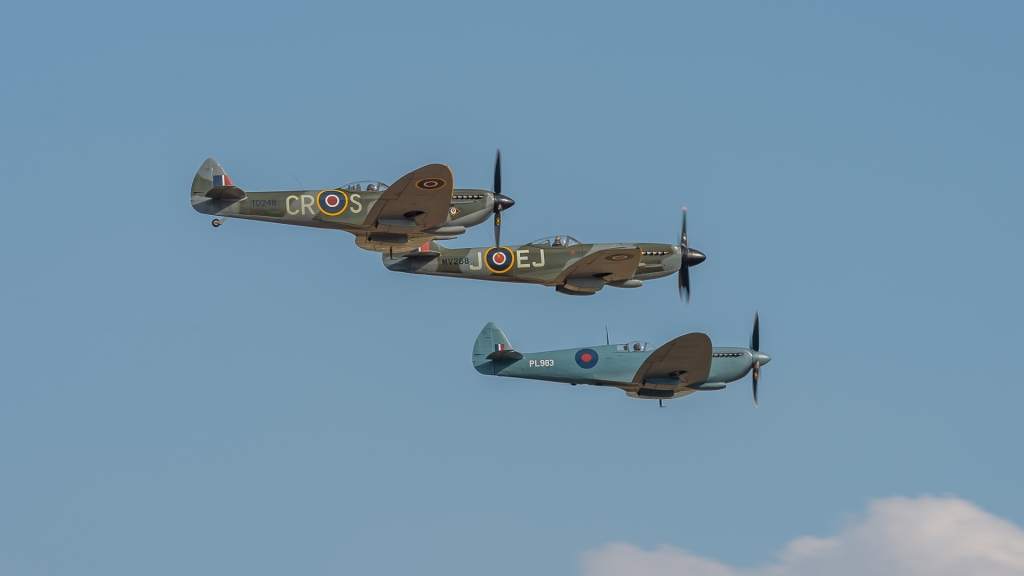 RAF Duxford was a part of the scenery for the filming of The Battle of Britain film.  The next fly-over in the Flying Legends edition of 2018 was a tribute to that the movie with four Buchon’s,Spitfire’s MkI, Spitfire MkV and Spitfire MkIX.

The Boeing B-17 G ”Sally B”, is the leading aircraft in the bomber Escort, B-17 Flying Fortress G-BEDF.  Sally B is the last remaining airworthy B-17 in Europe and based at the Imperial War Museum at Duxford and flies under the colour scheme of the USAAF 447th Bomb Group.  The B-17 G ”Sally B” was escorted by the largest and heaviest single-seater piston-engined fighter in history; P-47 Thunderbolt by the name of”Nellie.  Manufactured in 1945 and based at 492 FS, the Squadron markings have a distinctive red checkerboard nose with red nose band and red rudder. Three P51 Mustangs also played their part in the Bomber Escort. 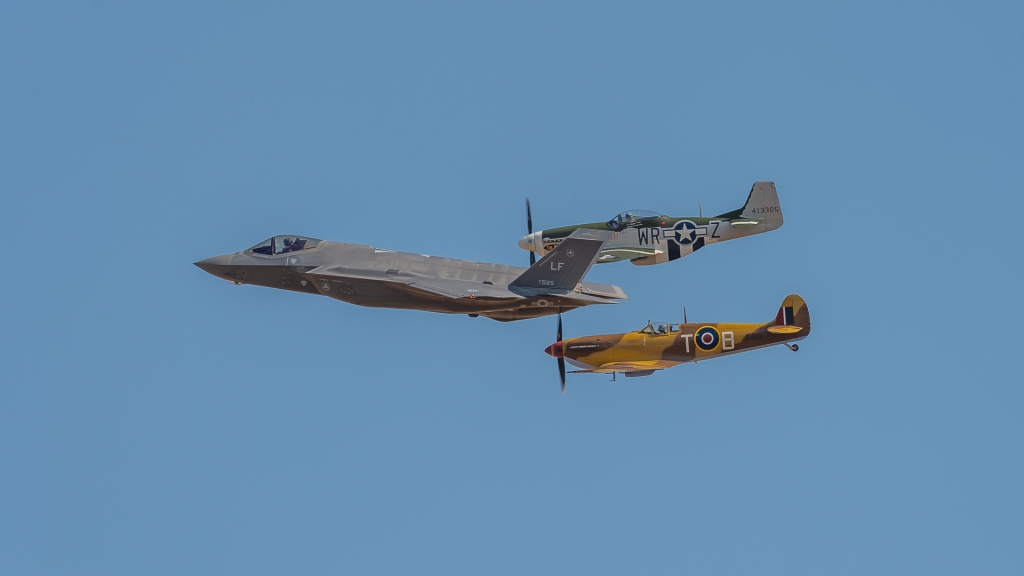 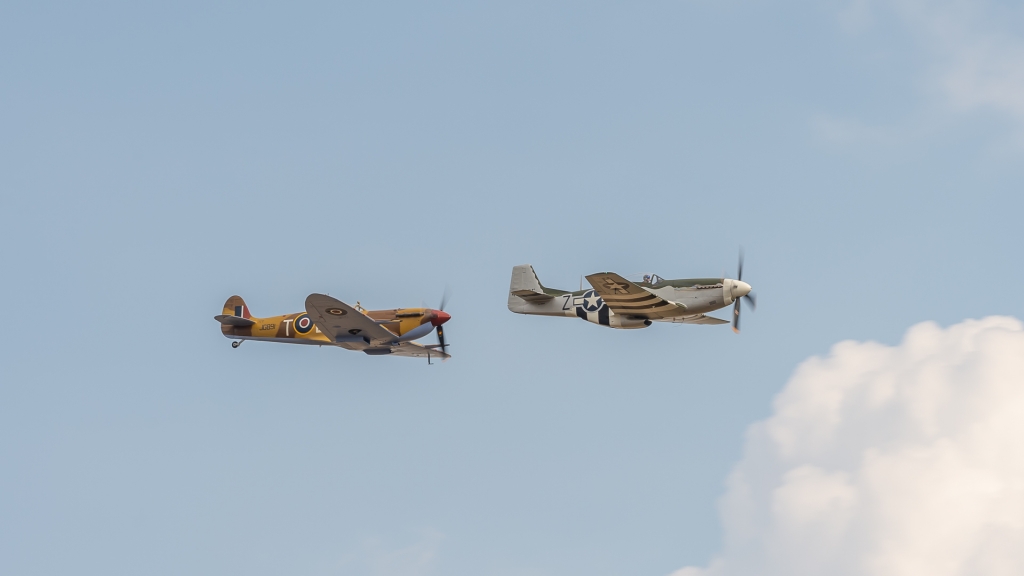 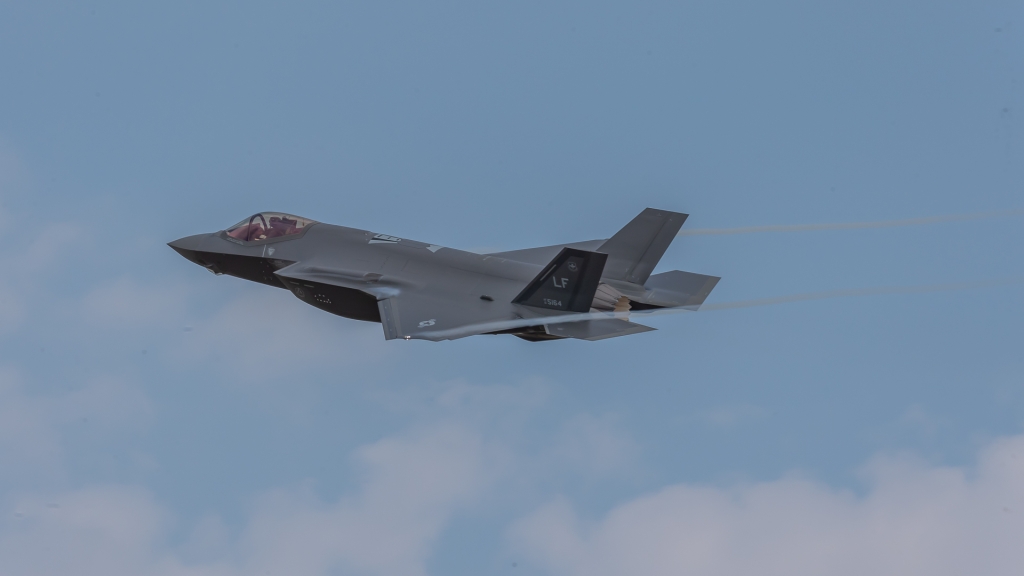 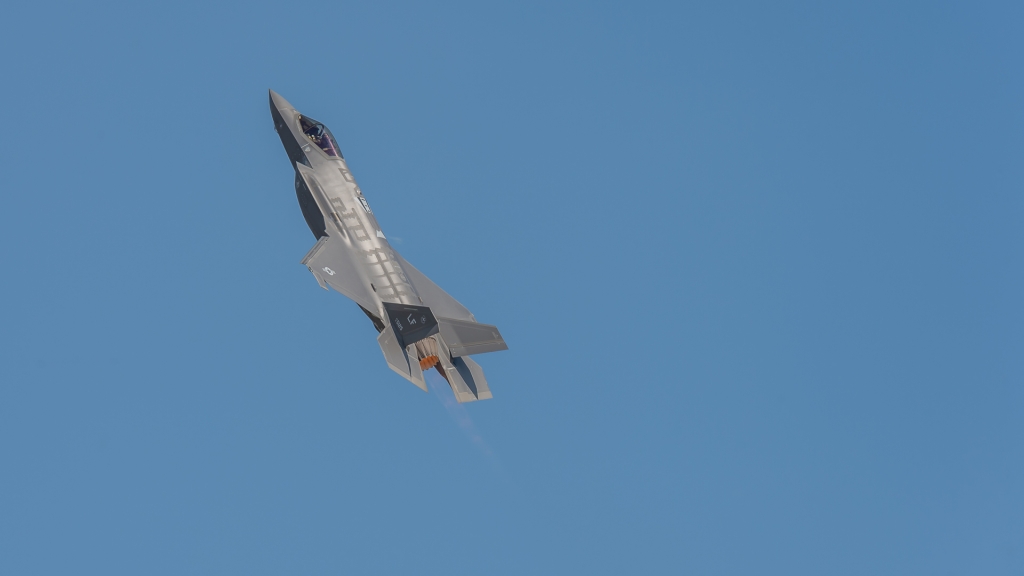 The Norwegian silver Douglas C-53D-DO from Foundation Dakota Norway was part of the Norwegian Tribute together with the Grumman Wildcat FM-2 in the 846 Sqn, Royal Navy colour scheme.

The Flying Bulls….. who are they?  They are a bunch of aviation enthusiasts with a great passion for rare historical aeroplanes and helicopters.  Their knowledge of plane maintenance and restoration is second to none.  Based in Austria, this all began in the 1980’s. 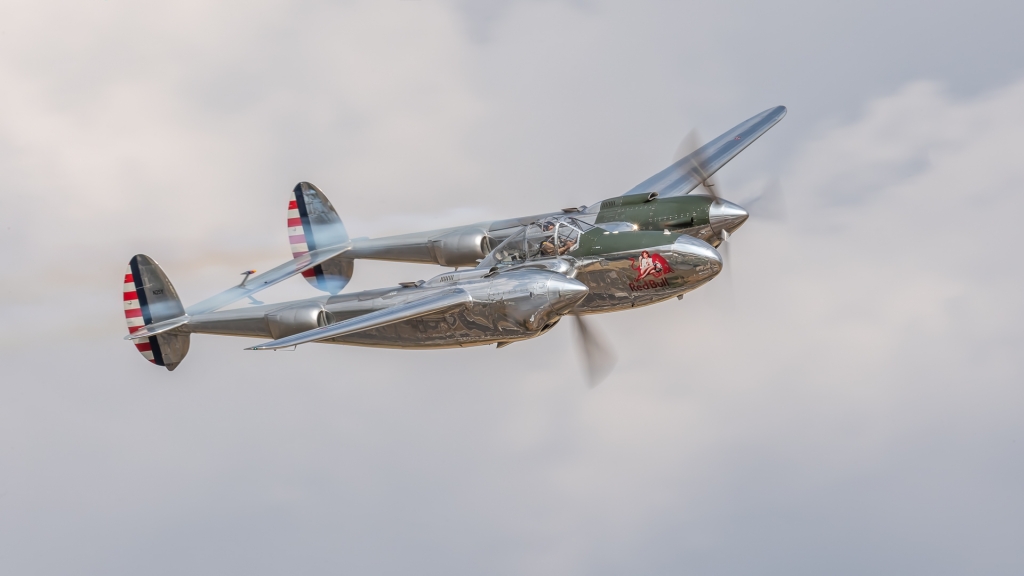 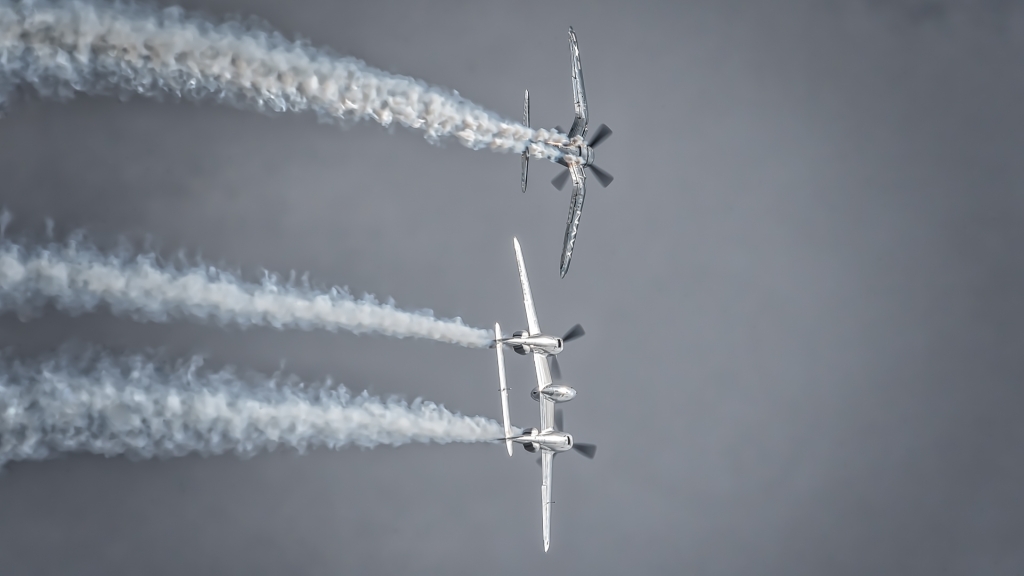 The P-38 Lightening by Lockheed is a very impressive aircraft in the world of aviation with its unconventional twin tail, it was commonly used during the Pacific War.  The twin-Allison engines with 1,600 horse power make the P-38 the perfect warbird for long distances due to its ability to fly higher and faster than any other fighters built around that time.  Between 1941-1945 more than 10,000 were produced.  Today the P-38 is a very rare model and appears to be priceless.

The B-25 is one if the most dazzling aircraft ever built in the USA.  There are many stories about the famous twin-engined ‘Mitchell’ which was named in honour of General William Mitchell.  With a take-off weight of 15 tons, the bombers were not made to be launched from an aircraft carrier.  To reduce weight, they were stripped down, removing any unnecessary parts and bigger tanks.  The guns were replaced by painted black broomsticks to deceive the enemy.  In the end, these B25-’s were the first bombers to be launched from an aircraft deck - with a runway length of only 250 meters! 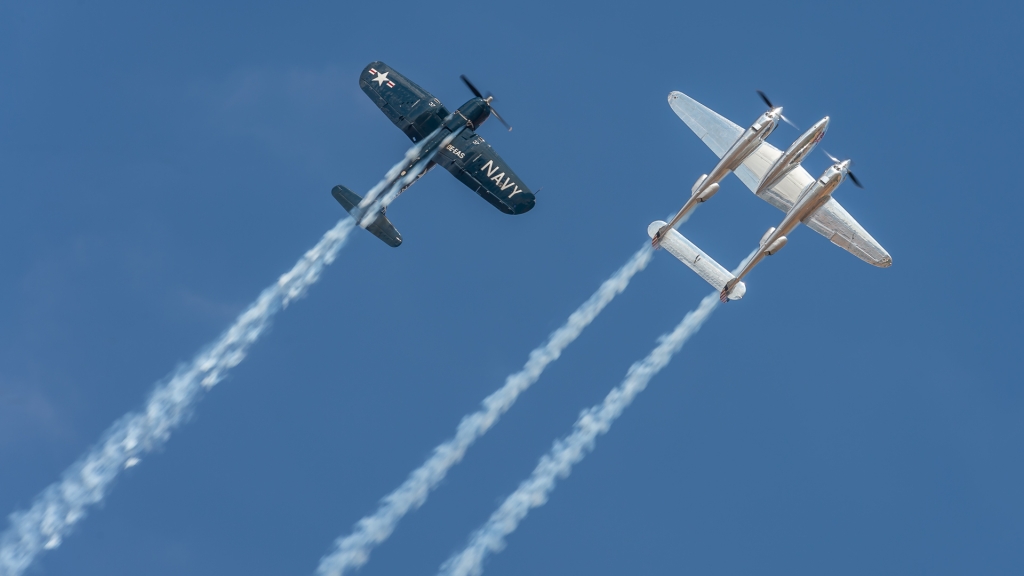 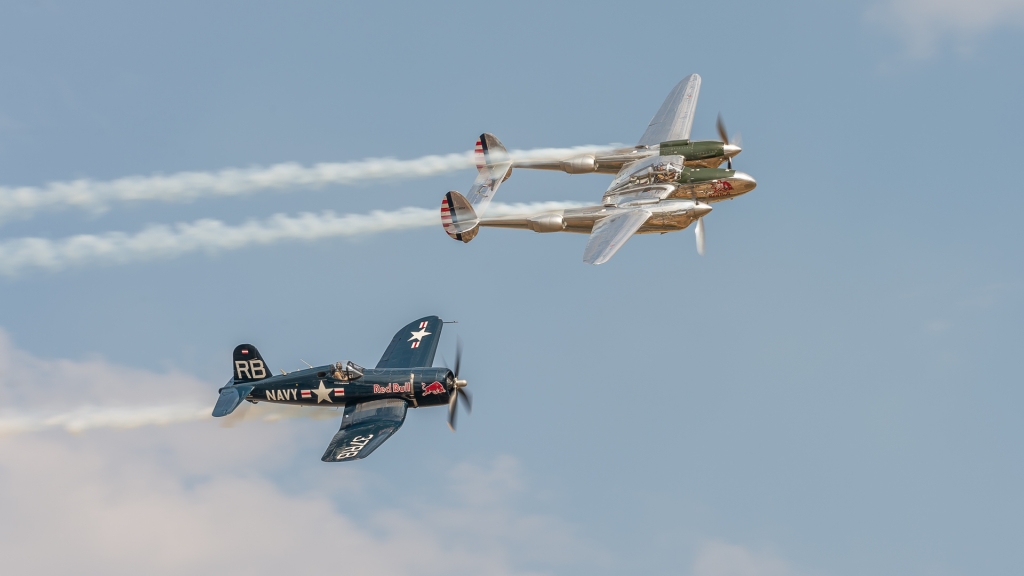 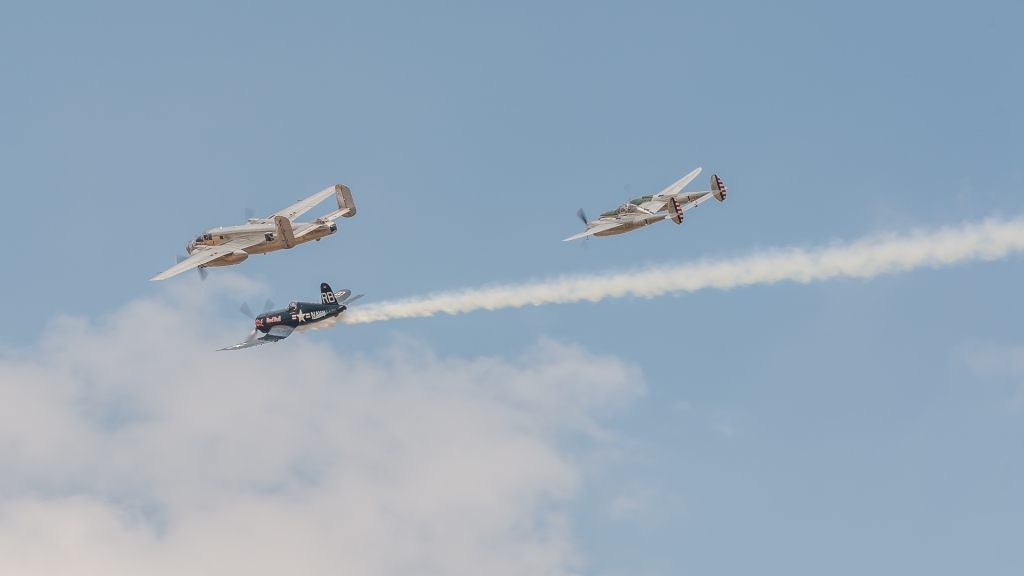 The Chance Vought F4U Corsair was developed to reach maximum speeds with minimal air resistance.  The US Marine Corps and the US Navy mainly used the Corsair during the Pacific War.  This plane was an excellent performer with a top speed that was very hard to beat.  Today, the single-seated masterpiece is fully aerobic and an absolute delight to see at Duxford.

The DC-6B, without a doubt, is the crown jewel of the Flying Bulls.  Built in 1958, the plane has had an illustrious past used to chauffeur heads of State and their celebrity guests all over the world.  The sheer size and unmistakable 1950’s coat of the DC-6B are as impressive as ever.  This plane, once registered as ‘Fish Eagle’ was finally given Austrian Citizenship, making it the first DC-6B to ever receive an Austrian code.

All good things must  come to an end and with the 2018 edition of The Flying Legends almost coming to a close, how can you better this ending than with the well-known Balbo Formation and the Joker. The part of the Joker was reserved for the  Hawker Sea Fury T.20.