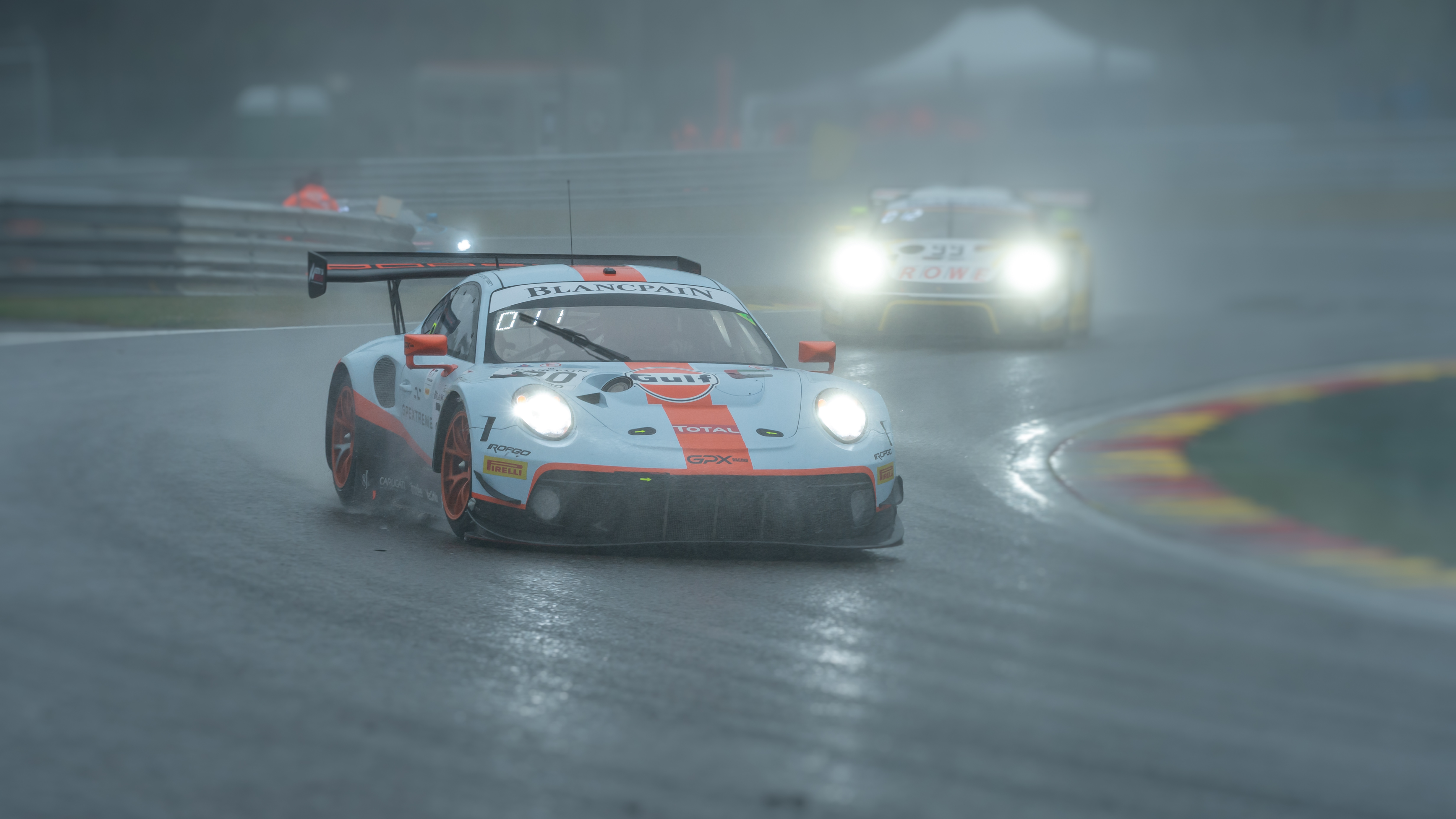 The Total 24 Hours of Spa came to life as the battle reached its final hours, with racing resuming in exciting style after a lengthy stoppage due to heavy rain at the Belgian circuit.
The event was under red flag conditions from 05.40 onwards, but with the rain abating as the morning progressed the cars rolled off pit lane at 11.15. After circulating behind the safety car for two laps they went racing again with five and a half hours left on the clock.

The leading #63 Grasser Lamborghini immediately divide into the pits to serve its technical pit stop, promoting the #34 Walkenhorst BMW into the lead and the #54 Dinamic Porsche to second place.

But, with both of these cars also needing to take their five-minute technical stop, the theoretical leader was the #72 SMP Racing Ferrari. It was by no means a comfortable advantage, however, as Mikhail Aleshin had Rene Rast in the #1 Audi Sport Team WRT car for company.
Both would hit trouble as they moved through the pack. Rast appeared to have issues first, making contact with the #188 Garage 59 Aston Martin on the run to Eau Rouge. The Audi was able to continue without problems, while the Aston limped back to the pits with significant damage. 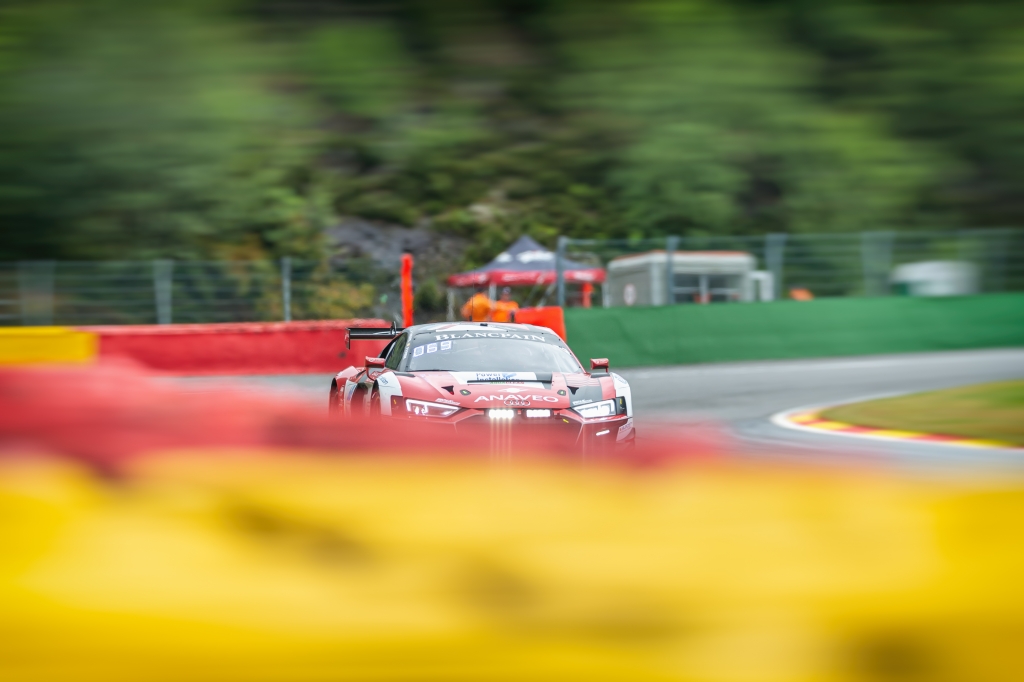 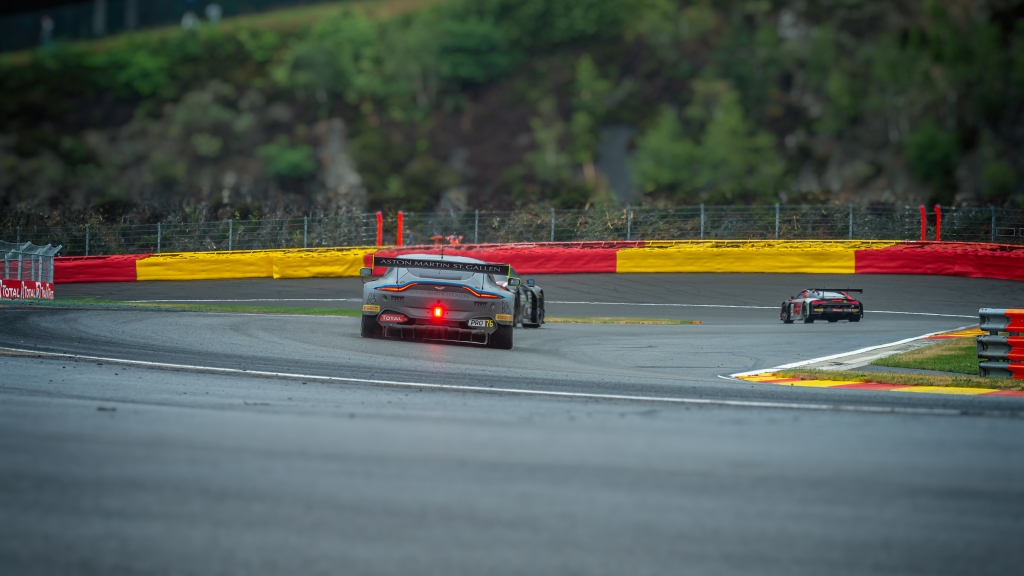 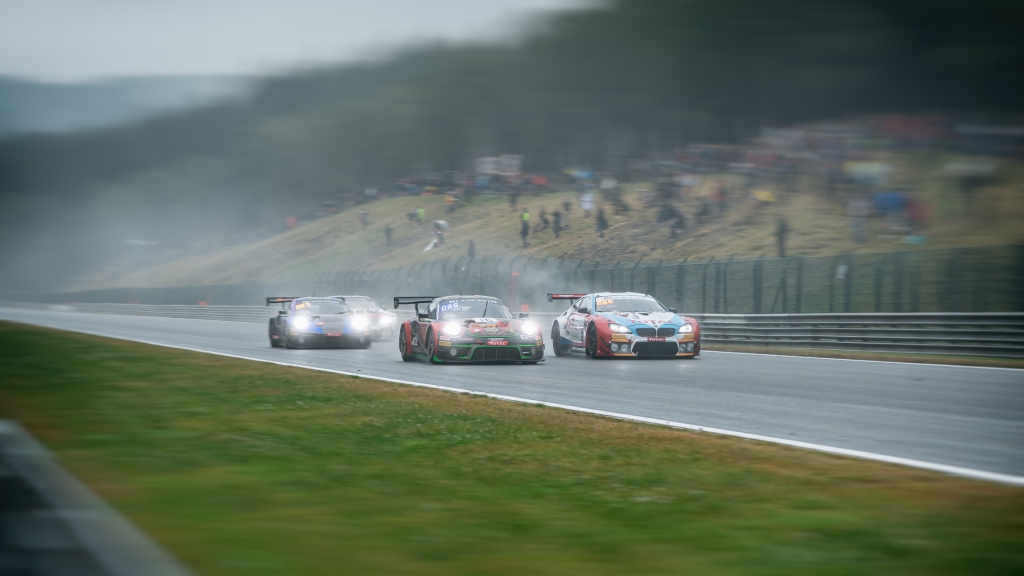 This was not a simple case, however, as Aleshin had already made contact with the Aston before it came together with Rast. The incident was still under investigation at 13.00 CEST.
Rast then caught and passed Aleshin, after which the Russian pilot had his own problems. The Ferrari driver lost the car at the exit of Pouhon, sliding back across the track before making contact with an oncoming Nissan.
This all but ended SMP's hopes of winning the race – though the crew of Aleshin, Davide Rigon and Miguel Molina could yet claim the Endurance Cup title today depending on the final race result. 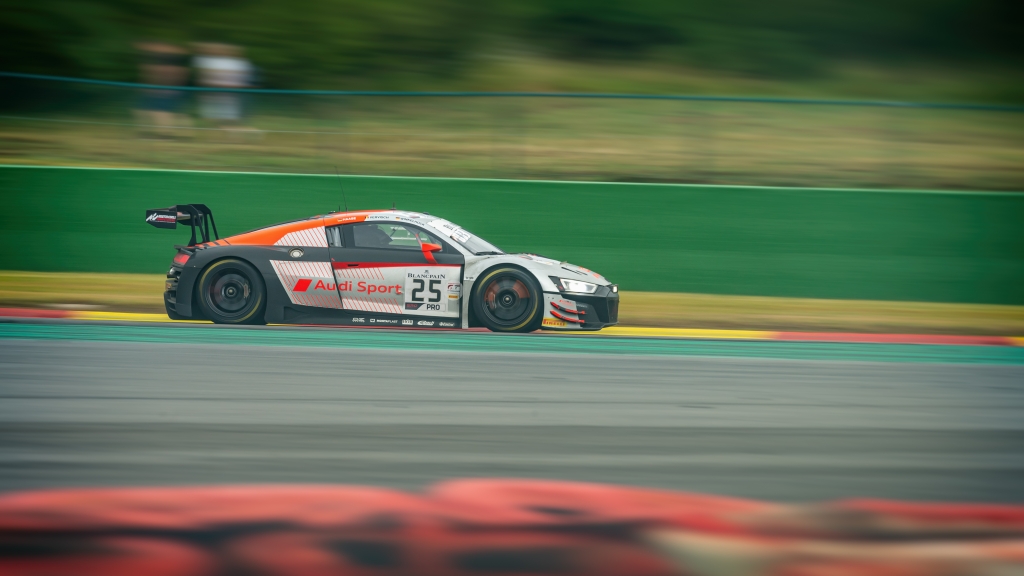 When the next round of pits stops concluded the #54 Porsche and #34 BMW led, but with their five-minute stops to come the #1 Audi was effectively in control. Its advantage was decreasing, however, with Michael Christensen (#20 GPX Porsche) and Yelmer Buurman (#4 Mercedes-AMG Team Black Falcon) in hot pursuit.
The Pro-Am battle appeared to be over barring a problem for the #97 Oman Racing by TF Sport Aston Martin, which runs two laps clear of its closest challenger int the hands of Salih Yoluc. The #78 Barwell Lamborghini topped the Silver Cup class, with Sandy Mitchell at the wheel of the British squad's machine. The #33 Rinaldi Ferrari looked strong in the Am Cup classification, running well ahead of the #77 Barwell Lamborghini.
The 2019 Total 24 Hours of Spa will conclude at 16.30 this afternoon. The Total 24 Hours of Spa remained under red flag conditions at 08.00 on Sunday morning as heavy rain continued to fall over the Ardennes circuit.
After a week of clear skies and high temperatures at the Belgian venue, bad weather arrived with a vengeance on Saturday afternoon – just in time for the race, which began at 16.30. This necessitated a safety car start, but the track dried out during the early stages and the majority of runners had switched to slick Pirelli tyres by the time the second hour arrived.
The rain returned later in the evening, however, and grew heavier as the night wore on. By the early hours of the morning it had intensified to the point that a red flag was necessary for safety reasons. This was first shown at 06.00, with the field following the safety car into the pits to wait for better conditions. 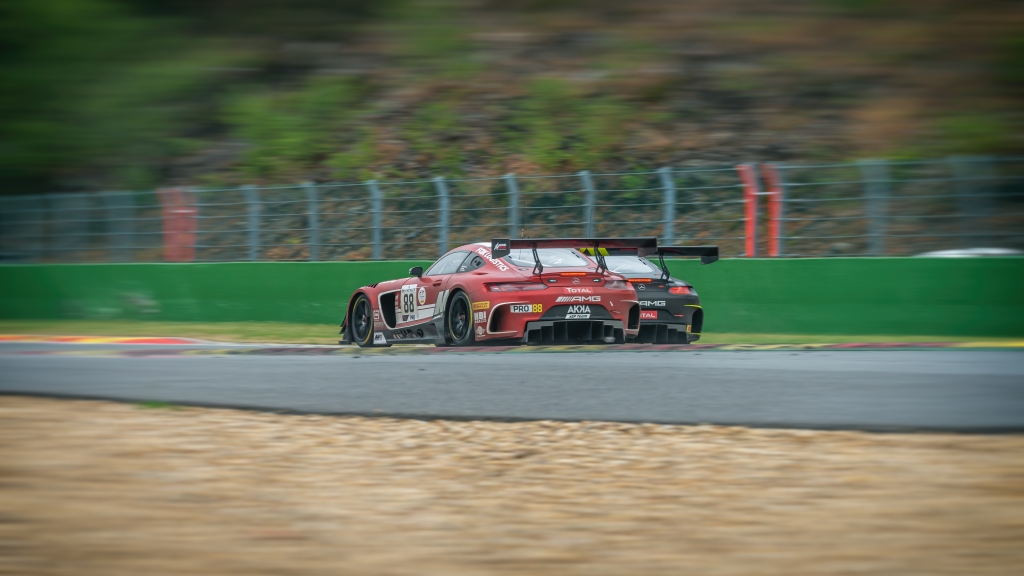 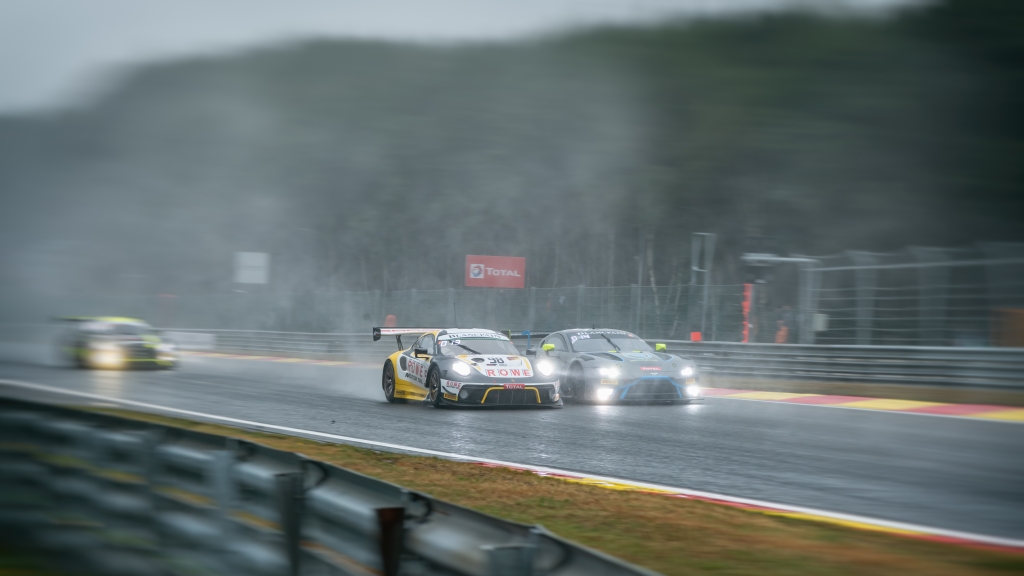 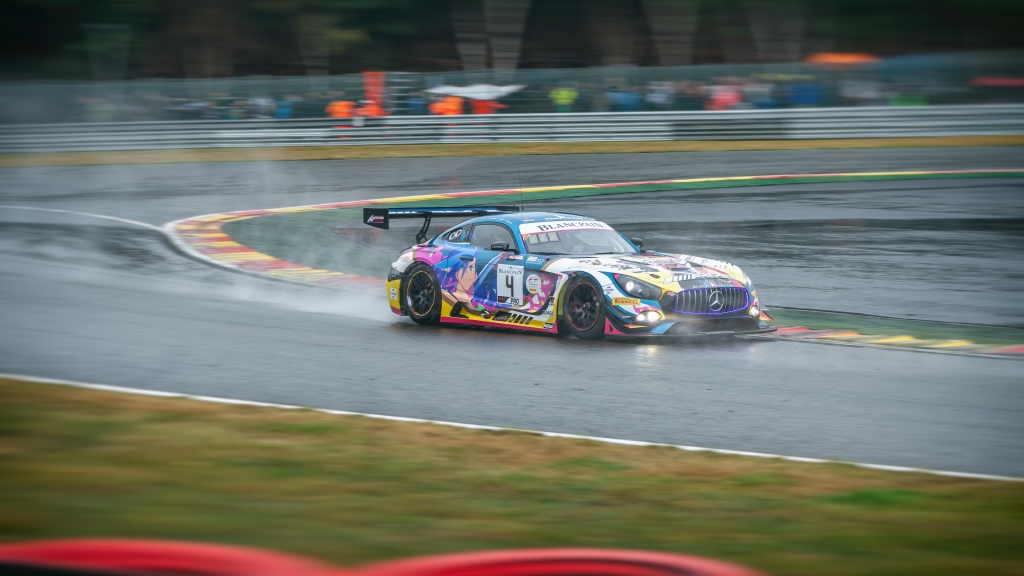 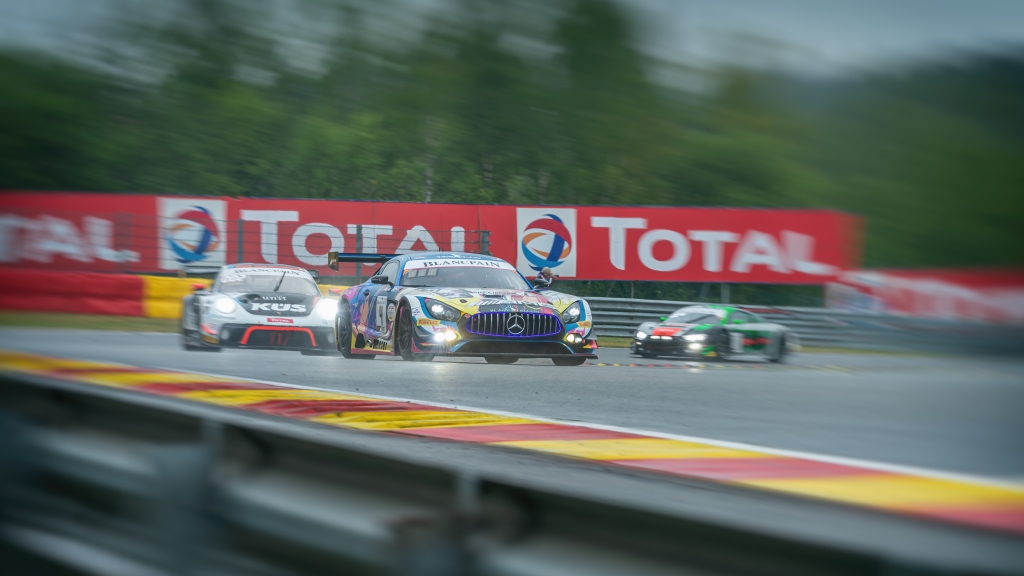 They remained there at 08.00 on Sunday morning, with no restart expected before 11.30.
Porsche won a battle of the heavyweights to clinch victory at the 2019 Total 24 Hours of Spa. The German marque beat fierce rivals Mercedes-AMG and Audi to climb the top step of the podium for the first time since 2010 and capture a one-two finish in the world's toughest GT race.
It came in a year that has seen Porsche place significant emphasis on conquering the Belgian endurance classic, with six 911 GT3 R machines contesting the Pro class at this season's race. Five of of those would finish among the top 10, but ultimately it was the GPX Racing squad that secured the win with a full-factory line-up of Kevin Estre, Richard Lietz and Michael Christensen at the wheel.
The #20 Porsche was the star of Saturday's opening stages, with Estre scything through the field from 11th on the grid to run second by the time the opening round of pit stops began. Maro Engel led the early stages from pole in the #4 Mercedes-AMG Team Black Falcon entry, which would prove to be one of the GPX Porsche's biggest challengers for the win.

Estre's heroics – which included passing another 911 GT3 R around the outside at Blanchimont – looked as though they might have been in vain. The #20 was hit with a drive-through penalty for a pit stop infringement, which dropped the car well over a minute off the lead.
But the crew battled back over the next few hours, returning to the top 10 by the time morning arrived at Spa-Francorchamps. By this stage heavy rain was falling over the circuit, making driving conditions near-impossible and leading to a red flag shortly after 05.40.

With the rain abating as the morning progressed the cars rolled off pit lane again at 11.15. The order took a little time to become clear as a number of cars had not yet taken their five-minute technical stop, a task the #20 GPX Porsche had completed at around 03:30.
The concluding battle took shape with the #1 Audi Sport Team WRT machine out front. The Belgian outfit's all-star crew of Rene Rast, Robin Frijns and Nico Müller had looked to be a threat from the first stint and they were out front as the race moved towards its final two-hour sprint. But there was excitement just around the corner. Having always looked to be in contention, the #20 GPX Porsche really came alive shortly before the 22-hour mark. First it overhauled the #4 Black Falcon car, with Estre blasting past Engel on the run down the Kemmel Straight.

Just one lap later he closed on Müller as they headed into Les Combes, where Müller briefly lost control of his car and made rear contact with the outside barrier. Incredibly the Audi was able to continue with almost no damage – but the lead had fallen to the Porsche.
Estre then set about building an advantage, pulling clear at the front while the battle for second continued. Engel eventually came under pressure from the charging Nick Tandy, whose #998 ROWE Racing Porsche was as rapid as the GPX effort during the final hours. The crucial move came with an hour remaining, with Tandy overcoming Engel after an entertaining battle from Bruxelles to Pouhon.

The race now looked to be settled – but there were a few late twists to follow. A full-course yellow and safety car period began with just 25 minutes remaining after the #16 Modena Motorsports Porsche crashed out from third in the Pro-Am class. Estre looked to have successfully dealt with his final restart, only for the #1 Audi Sport Team WRT machine to make contact with the #54 Dinamic Motorsport Porsche and bring out another full-course yellow and safety car.

The French driver made one last push for the finish, eventually bringing the #20 GPX Porsche home to secure the marque’s seventh overall win at the Belgian endurance classic. The #998 ROWE Racing machine shared by Tandy, Patrick Pilet and Frederic Makowiecki completed a fine run to second, with the #4 Mercedes-AMG of Engel, Luca Stolz and Yelmer Buurman third after a faultless showing in the Ardennes. 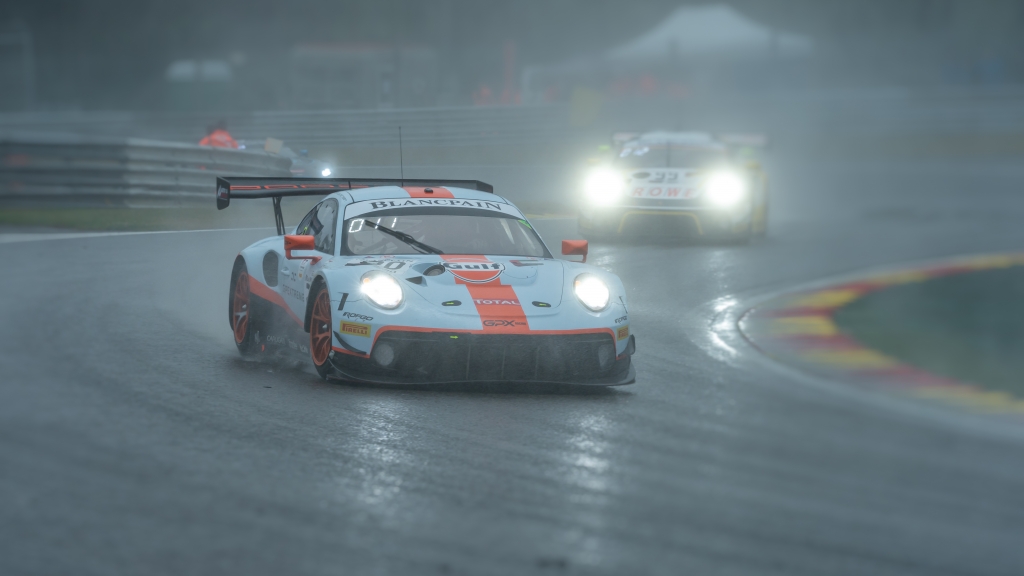 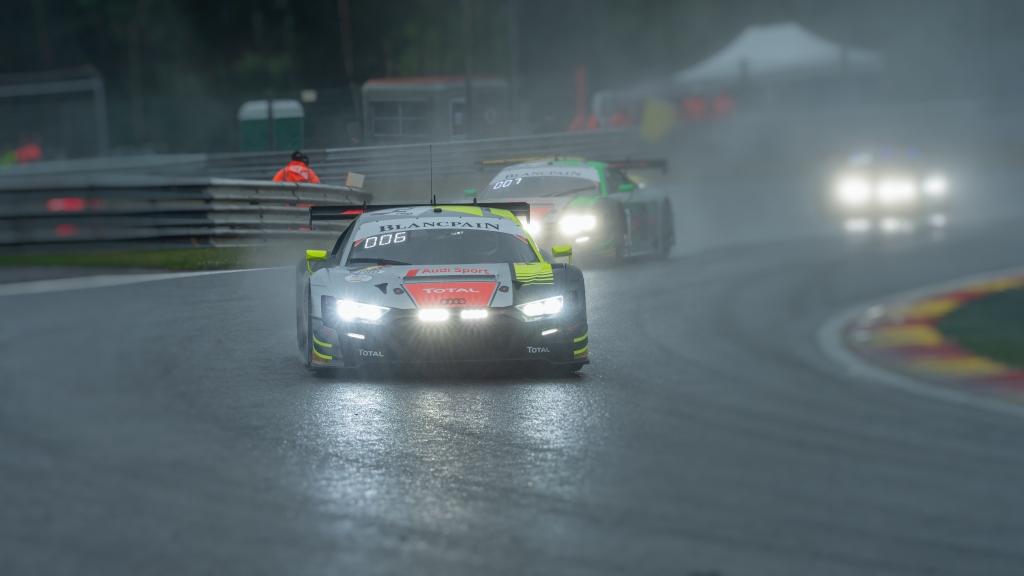 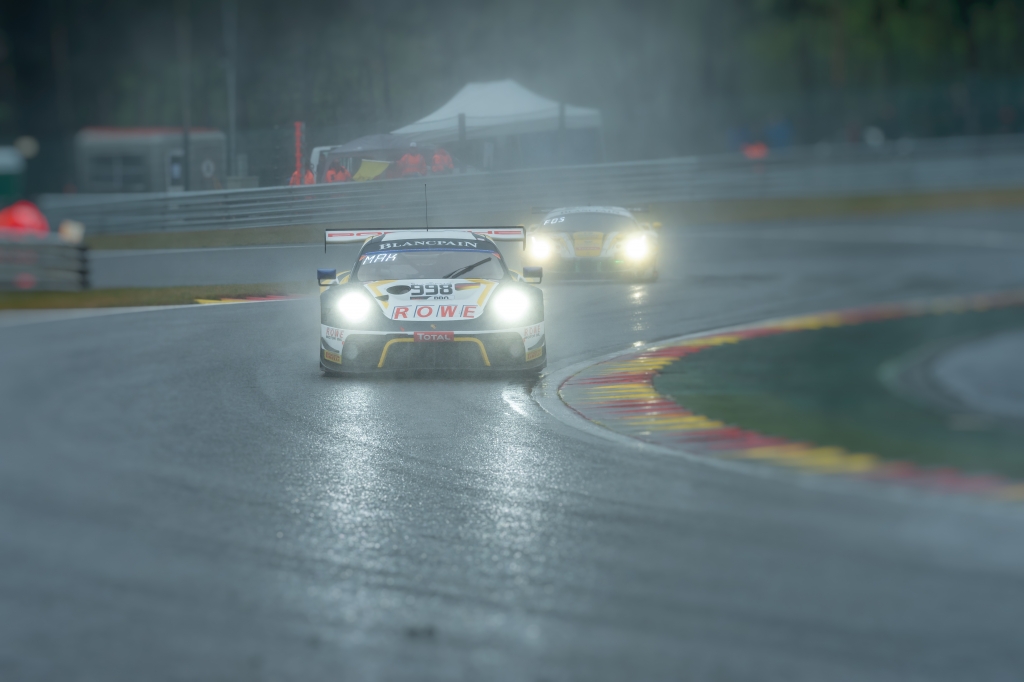 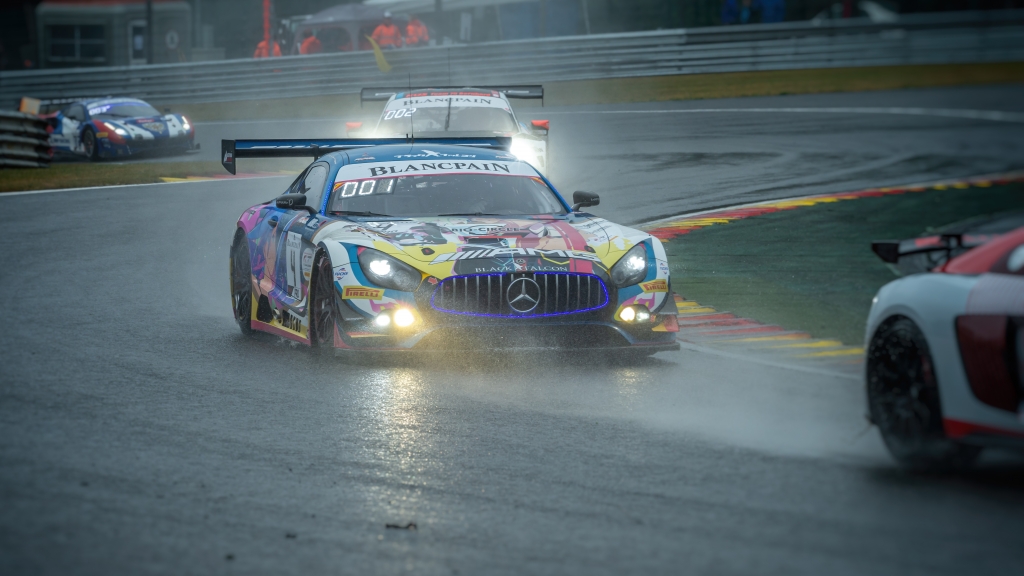 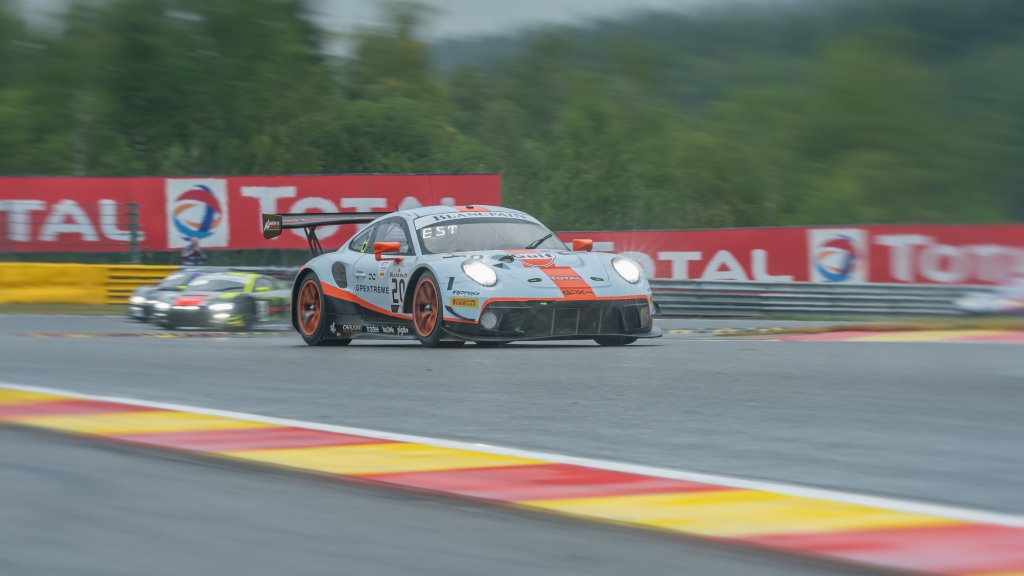 Audi Sport Team Sainteloc was fourth, a repeat of last year’s result for Markus Winkelhock, Christopher Haase and Frederic Vervisch. Another ROWE Porsche was fifth thanks to Romain Dumas, Mathieu Jaminet and Sven Müller, while Honda scored a superb sixth-place finish from 33rdon the grid with its lone Pro class NSX GT3.

Silver Cup honours were secured to the #78 Barwell Motorsport Lamborghini, which went one better than its 2018 result to take a hard-fought victory. Sandy Mitchell was the only driver to return from last year's crew and led a sterling effort alongside James Pull and Jordan Witt.
The #55 Attempto Racing Audi led the early stages from pole and was a contender for the overall top 10, but dropped out during the night. This made the race a two-horse battle between the #78 Lamborghini and the #90 AKKA ASP Mercedes-AMG, with the latter taking the points for leading after six and 12 hours despite starting from the pit lane.

But the Barwell car prevailed over the second half of the race, eventually finishing seven seconds clear after the late safety car closed the gap. Having missed out on Silver Cup victory last year by just a few seconds, Barwell made absolutely certain of success this time around. The AKKA ASP crew of Nico Bastian, Felipe Fraga and Timur Boguslavisky can be content with the fact that they have clinched the class Endurance Cup title with a round to spare, while the #6 Black Falcon Mercedes-AMG completed the podium.

This would also see the #97 Aston Martin start the race from the pit lane, 30 places behind the class pole-sitter. Despite this setback the car stormed through the field to lead at both six and 12 hours, then ran faultlessly to the finish. Thiim was at the wheel for the final hours and was predictably measured on route to victory, taking 22nd overall and finishing a lap clear of his closest contender. 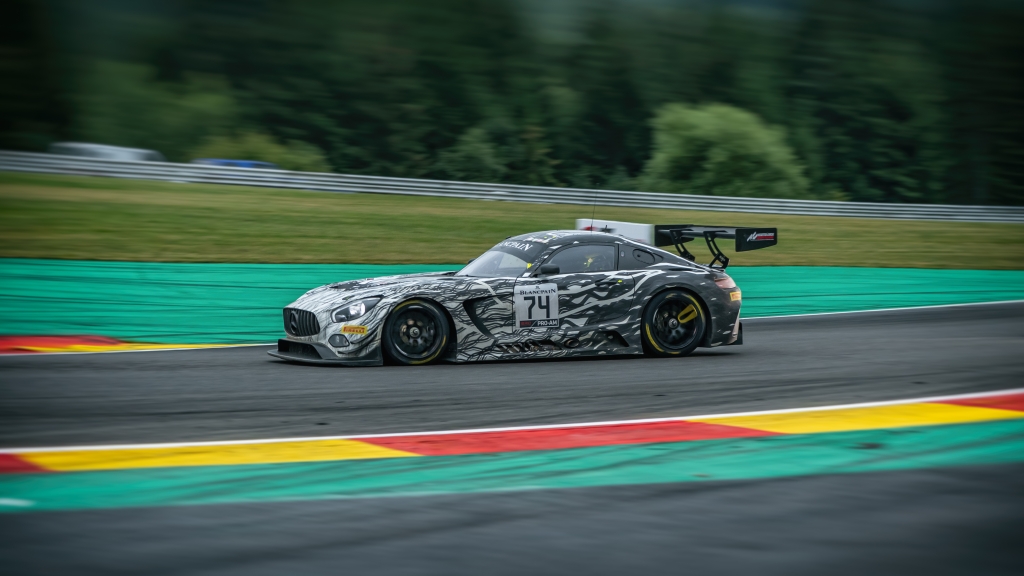 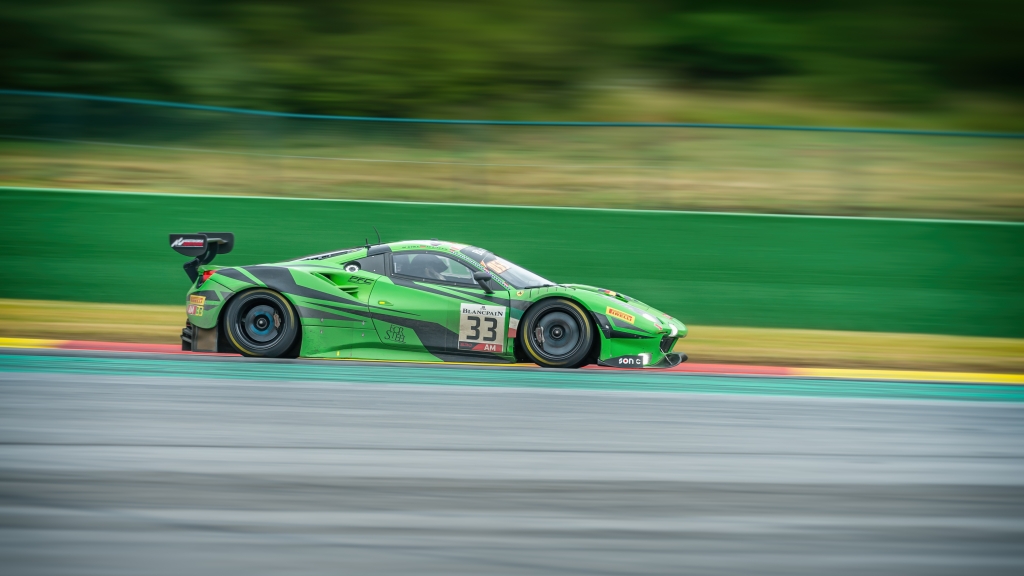 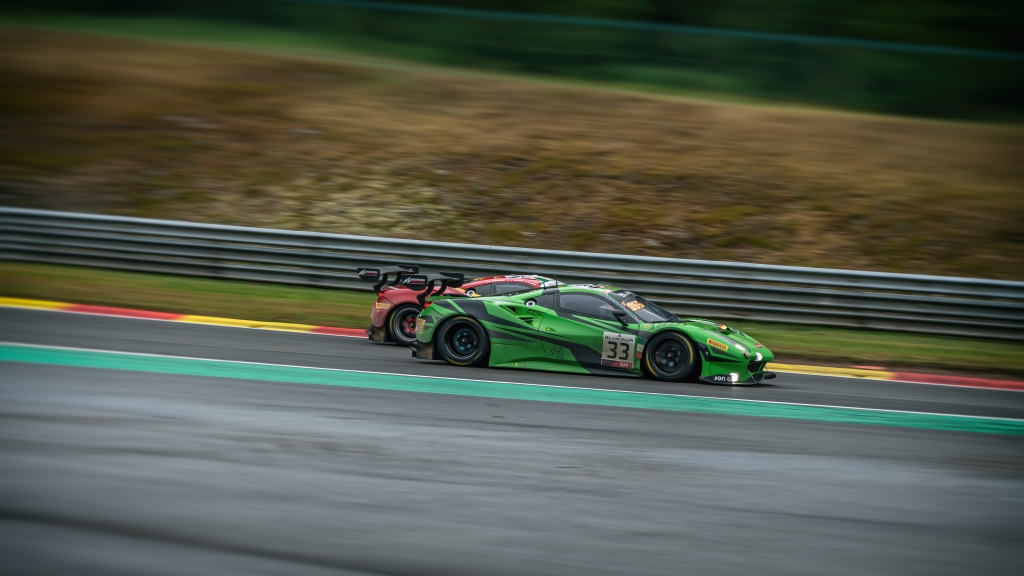 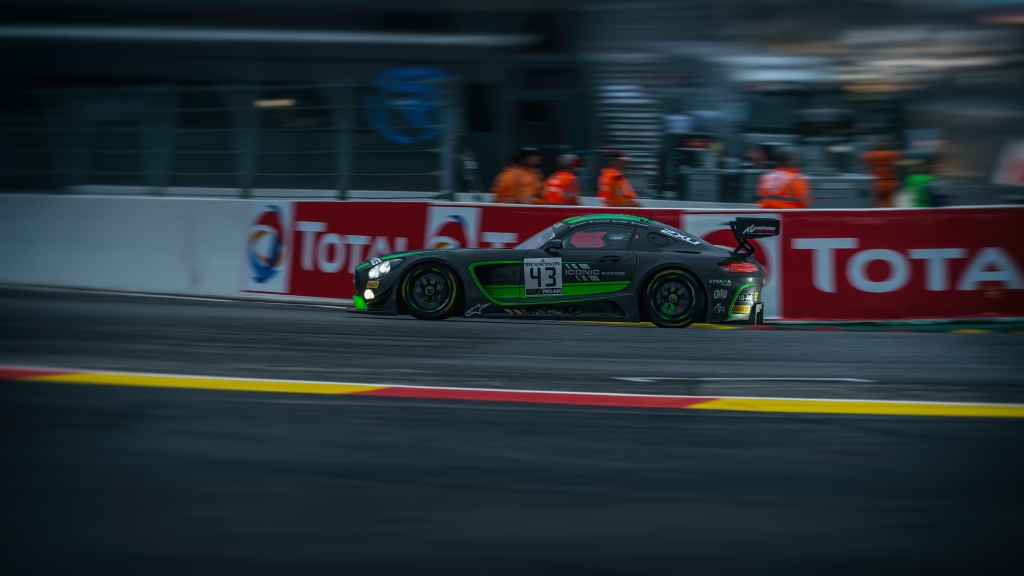 The #74 Ram Racing Mercedes-AMG took second spot and despite missing out on victory will nevertheless travel to the Barcelona season finale in title contention. The #43 Strakka Racing Mercedes-AMG crew completed the podium.
The #33 Rinaldi Racing Ferrari bagged Am Cup honours, ensuring another class win at the 24 Hours for the German outfit. Having triumphed last year in Pro-Am, Rinaldi was able to conquer a different challenge this year. Alexander Mattschull was part of both efforts, with Christian Hook, Manuel Lauck and Hendrik Still joining his for this year's assault.

The destination of the winners' trophy not decided until the final hour, with the Rinaldi car battling reigning class winner Barwell Motorsport throughout the second half of the race before prevailing in the final hour.

Despite finishing as runner-up two of the #77 Barwell Lamborghini’s crew – Adrian Amstutz and Leo Machitski – clinched the Endurance Cup crown with a round to spare. The final spot on the Am Cup podium belonged to #29 Raton Racing by Target Lamborghini outfit, while the Coupe du Roi – which rewards the manufacturer with the best results across the classes – was won for a second year in succession by Mercedes-AMG.

A record 72 cars took the start of this year’s Total 24 Hours of Spa, but despite hugely challenging conditions at one of the world’s most daunting circuits the race was able to run without major incident. This was not only a credit to the drivers but the many track workers, who remained on their posts in extremely difficult weather conditions to ensure the event’s smooth running.

For the winners of today’s race, it is now time to celebrate a successful assault on the Belgian endurance classic. For the rest of the field, the first stage of preparation for the 2020 Total 24 Hours of Spa will already be underway.